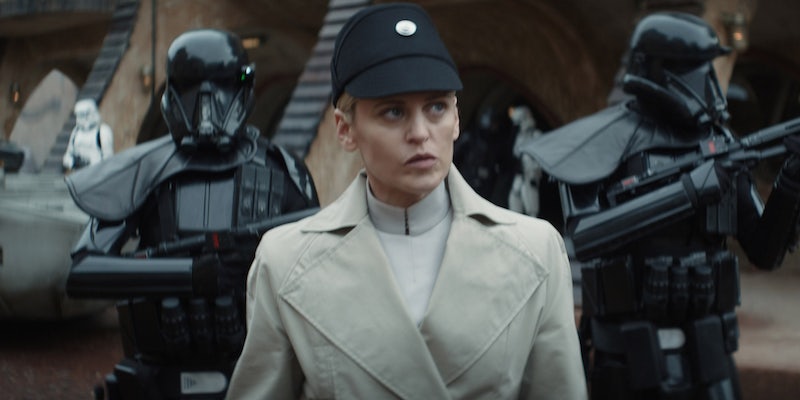 In ‘Andor’ episode 12, revolution is built on community

The season finale is another triumph for Andor's brutal, brilliant political storytelling.

Step by step, Andor has undermined the hero-driven narrative of the original Star Wars trilogy, a classic American fairytale where one Very Special Guy saves the universe by defeating a supervillain.

Building from the more politically insightful elements of The Last Jedi and Rogue One, showrunner Tony Gilroy emphasizes that anyone can make a difference in the battle against fascism—and that it’s ultimately a collective effort. The death toll among the heroes is high, but for every person who dies, more are inspired to take their place. Meanwhile, the Imperials are so obsessed with catching Cassian and “Axis” (Luthen Rael) that they fail to see the obvious truth: Ferrix is a powder keg, and a mob of frustrated civilians is more dangerous than one missing criminal.

Tough, moving, and reliant upon dozens of moving parts, the buildup and payoff for Maarva Andor’s funeral is everything Andor does best. In the background of the main story, the show has gradually introduced an ensemble cast of tertiary characters on Ferrix, creating a sense of community that comes together around Maarva’s death. Despite Cassian’s introduction as a ne’er-do-well who owes money to everyone in town, he still has plenty of allies on Ferrix, helping him hide from the Empire when he returns for the funeral. And while he plays to type by sneaking around in the shadows, others end up on the front lines of a direct confrontation—including Maarva herself, who delivers her own eulogy in holographic form.

Composer Nicholas Britell truly comes into his own this week, reprising two of the score’s recurring motifs during Maarva’s funeral procession. As always, Andor uses direct exposition sparingly, relying on direction and production design to flesh out the story. We know that the Daughters of Ferrix are (in the words of the Imperials) a local social club, and that Ferrix funerals involve baking a person’s ashes into a brick. Beyond that, everything we understand about this community is transmitted through people’s behavior, arriving en masse in quasi-military uniforms; a cultural sign of respect. As the bell-ringer hits his anvil in a signal to the mourners, the Imperials (who smugly assumed they were controlling a small 40-person gathering) begin to panic at this influx of unpredictable behavior.

“There is a wound that can’t heal at the center of the galaxy,” says Maarva’s hologram, speaking to a crowd surrounded by stormtroopers. “The Empire is a disease that thrives in darkness. It is never more alive than when we sleep.” When an Imperial officer kicks over the projector to silence her words, it sparks a riot.

This sequence is a gripping culmination for the show’s political message, working in tandem with the espionage storyline between the ISB and Luthen Rael. The city is full of people searching for Cassian: Syril Karn, Dedra Meero and her hilariously obvious surveillance guy, Luthen Rael and his agents. Already established as cowardly and unimaginative, the Imperial garrison is ill-equipped to handle this kind of uprising.

Cassian manages to rescue Bix from her cell, and the stormtroopers are run out of town. Dedra only survives because Syril drags her out of the crowd; a huge win for his newfound role as her creepy #1 fan. However the riot still has a brutally realistic high body count. Numerous tertiary characters get shot or trampled underfoot, or have to flee their homes. And unlike in a “normal” Star Wars spinoff, there’s no sense sense of certainty about a happy ending. It’s all too plausible that the Empire will crush Ferrix in retaliation soon enough.

After being positioned as a controlling mastermind in earlier episodes, Luthen finally displays his ability to shut up and listen. His original plan was to surveil the funeral and kill Cassian to clean up loose ends, but as the riot unfolds, he comes to a quiet realization: Without being a traditional leader, Cassian’s involvement in the Rebellion has indirectly led an entire city to rise up against the Empire.

Luthen is witnessing in real time something that Karis Nemik explains in his manifesto: “Freedom is a pure idea. It occurs spontaneously and without instruction. Random acts of insurrection are occurring constantly throughout the galaxy. There are whole armies, battalions that have no idea that they’ve enlisted in the cause.” So when Cassian confronts Luthen in the final scene, it doesn’t go how we might have predicted. Luthen no longer sees Cassian as a weak link, and with nothing tying Cassian to his old life, he offers Luthen a choice: Kill him now, or recruit him full-time to the Rebellion.

There’s a lot of chatter among Andor fans that the show is somehow undervalued or under-watched compared to the lighter Star Wars spinoffs, but the finale strongly suggests that Tony Gilroy always expected a second season. While this marks the end of Cassian’s origin story, several key subplots are left unfinished: Syril’s obsession with Cassian, the ISB’s hunt for Axis, and Mon Mothma’s financial troubles, which have now led her to barter away her daughter’s hand in marriage. On a thematic level, Andor is already a singular triumph, but it’s going to be a long and arduous wait for the next episode in 2024.