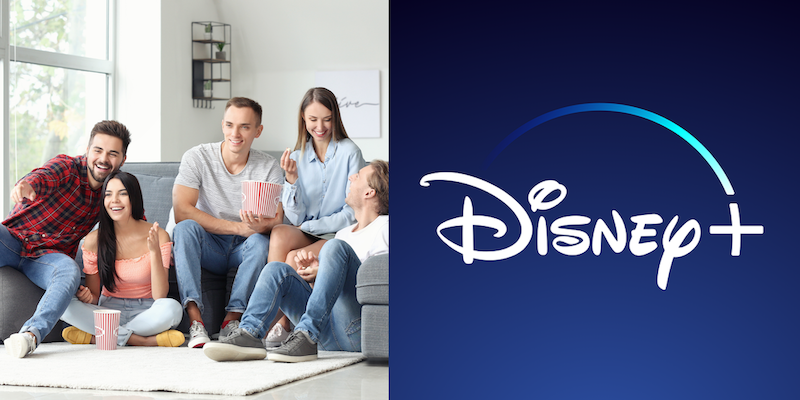 The best streaming services for watching movies with friends

The best options for movies night with friends far and near.

There are a lot of streaming services out there. You’ve got your big players and your new-kids-on-the-block all trying to get a piece of the streaming pie. So with all of these platforms vying for your attention, how can you narrow it down? The easiest way is to read our list of the best streaming services for watching movies with friends, family, or just yourself. Go ahead. Subscribe to one…or three. No one’s judging.

Disney+ has got all your favorite movies and childhood shows—the princess classics and the supernatural currents. You can even make it a virtual movie night with the GroupWatch feature and bring in up to six people to watch with you – the perfect way to watch movies with friends who live far away. Save up to 25% with the Disney Bundle, which includes Disney+, ESPN+, and Hulu.

No, this isn’t the modern take on 101 Dalmations. This is something much more than that. Academy Award Winner Emma Stone stars in this new iteration of the Cruella story, alongside Joel Fry and Paul Hauser as her trusty sidekicks. Here, we see the inception of the famous villain, her roots, and her beginning fascination with the famously spotted coats. It’s got just the right amount of mystery, humor, and surprise for a friend’s night in.

If you were ever looking for a film about the pressures and pleasures of family life, this is the movie for you. Everyone in Mirabel’s family has been gifted with powers beyond belief, except her. You and your friends are sure to find commonalities with this colorful cast and their real-life struggles. Follow the “outcast” Mirabel and her wild band of siblings as they navigate their extraordinary familial life and try to find their place in it all.

If your friends are Disney enthusiasts, here’s a great semi-new Disney Original that might have flown under the radar upon release. Godmothered takes an in-depth view, for the first time, of the Fairy Godmother origin story.

We’re all familiar with the Cinderella story, but after so many years, what do we really know about the person key to it all? Finally, you and your friends can go behind the scenes to find out what makes the person central to our most beloved fairy tale tick. It’s full of hilarious one-liners, unforgettable characters, and that signature Disney heartstring pull.

Sling might be one of the best streaming services for watching movies with friends. With Sling’s Watch Party, up to three friends and family can join your live TV stream and video chat away while the show’s on. It’s the perfect way to connect with your loved ones.

Distraught girlfriend tags along with her boyfriend back to his roommates’ rural hometown for a midsummer festival in hopes for a good time run high. But as the community accepts the newcomers, and the days pass, the innocent celebration starts to take a turn for the worst. Underneath the sun, flowers, and dancing, lies a pagan cult out for blood.

Brought to you by the A24 studio, this horror film written and directed by Ari Aster will leave you shaking.

This twist on the beloved classic will leave you in tears. It’s a re-telling of the march sister story. Follow along as Jo, Amy, Meg, and Beth grow through their adolescence and into their formative years. They deal with war, love, loss, and struggle but the red thread that ties them together through it all is their love for each other as sisters.

Watch this timeless tale with your family or your friends. We promise there won’t be a dry eye in the house.

This may be one of the most iconic movies of the early 2000s. Anne Hathaway plays a recent graduate looking to break into journalism when she lands the position as the assistant to an infamous editor-in-chief of a high fashion magazine.

As she gets pushed and pulled into the world of fashion, can she rise up to the occasion? Or will she get dragged under?

If it seems like HBO is home to all of TV’s home run hitters, it might be because it is. Classic series like Curb Your Enthusiasm and The Sopranos and forever favorites like Dirty Dancing and the Harry Potter Collection. Pull up a chair and settle down with a never-ending list of great tv shows and movies with friends.

It’s hard for me to believe that there are those out there that still haven’t seen Sex in the City, but apparently, there are. Listen up; this is hands down one of the best shows about being single and having amazing friends. Follow Carrie Bradshaw—relationship and sex columnist in New York City—and her three unique friends as they navigate life, love, and sex in their thirties.

While the main character seems to be on the endless hunt for love and a relationship, I recommend you turn your sights to the single woman of the century: Miss Samantha Jones. As one of the four main leads in the Sex and the City universe, Samantha Jones is the freest, single, and sex-driven of them all.

Follow her care-free attitude exploring all the taboo sexploitation of the decade, and fall in love with being single and having great friends. And, when you’re all done, check out the reboot And Just Like That. You and your friends will be entertained for a long time.

Featuring breakout star Barbie Ferreira, this HBO original is the next hot take on regulated contraception you didn’t know you needed—oh, and friendship. When Ivy-league-bound Veronica Clarke (Haley Lu Richardson) finds out she’s pregnant, she enlists the help of her most chaotic friend to drive her across state lines in order to get an abortion.

It’ll have you cherishing your friendships more than ever, and maybe your state laws too. Because who but your BFF would pack up on a school night just to get some Plan B?

Euphoria is mostly known for its deep dive into the serious effects drug addictions can have. While its drama-filled relationship storylines are enough to make any person happy to have normal friends, it really does show just how far a friendly gesture can go.

Home to some of TV’s favorite originals like Abbott Elementary, The Great, and High Fidelity, Hulu’s a serious contender in the hunt for the best streaming services for watching movies with friends. You can start watching today with a free 30-day trial on Hulu.

Victoria Morales and Kuhoo Verma come together to tell a tale as old as time. Teen loses her virginity, contraception goes wrong, and Plan B kicks in (literally). At face value, this movie is nothing more than a hilarious telling of an unfortunate story, but if you dig deeper, you realize what this movie is really about. Finding emergency contraception has gotten harder and harder. Will these teens be able to hunt down their Plan B? Or will there be just too many roadblocks in the way?

2. Only Murders in the Building

When you’re single and you’ve got some time on your hands, put on a show that showcases the only great love you’ll ever need; the love of murder podcasts. Oh, and spontaneous friendships. Only Murders in the Building follows a band of three unlikely friends who find an unbreakable bond through their love for amateur crime-solving.

Their whirlwind tail will take you through tons of ups and downs, laughs, and gasps as they try to solve a string of murders taking place in their apartment building. By the time you finish, you’ll be calling up your friend group to set up a weekly podcast listening party.

If you ever needed confirmation that not everyone in a relationship is who they say they are, Joe Millionaire is the show for you. The premise: two men, one rich, one not, and 24 women who have no idea who is who.

While the men are searching for true love, they’re tasked with the heavy burden of sniffing out who’s there for love, and who’s there for the money. The cherry on top is the super-candid behind-the-scenes interviews that let you, the viewer, know exactly where these women stand. Our favorite love match? The budding bromance between the two men looking for love. It’s a tale as old as time.

Paramount Plus and Showtime

It’s the merger of the century. Now, Paramount Plus members can watch their favorite showtime content directly on the Paramount app with no hassle included. You’re sure to find something for everyone when you’re looking to watch movies with friends. Start streaming today with the 7-day free trial for Paramount Plus and Showtime bundle, and get up to 28% in savings. Happy watching.

“Starring Jeremy Renner, Mayor of Kingstown follows the McLusky family—power brokers in Kingstown, Michigan where the business of incarceration is the only thriving industry. Tackling themes of systemic racism, corruption, and inequality, the series provides a stark look at their attempt to bring order and justice to a town that has neither. The series is executive produced by Sheridan, co-creator Hugh Dillon, Jeremy Renner, Antoine Fuqua, David C. Glasser, Ron Burkle, Bob Yari, and Michael Friedman.”

WATCH ON PARAMOUNT PLUS

“This prequel to Yellowstone follows the Dutton family as they embark on a journey west through the Great Plains toward the last bastion of untamed America. It is a stark retelling of Western expansion, and an intense study of one family fleeing poverty to seek a better future in America’s promised land—Montana.”

WATCH ON PARAMOUNT PLUS