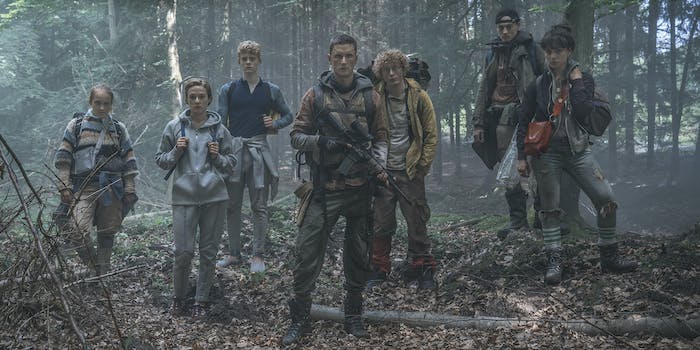 ‘The Rain’ is a compelling, albeit generic, dystopian thriller

It lacks originality, but it's still certifiably binge-worthy.

From the moment the first drop of precipitation falls in The Rain, fans of dystopian thrillers will be hooked on the Danish Netflix series that became available for streaming May 4.

Created by Danish filmmakers Jannik Tai Mosholt, Christian Potalivo, and Esben Toft Jacobsen, The Rain follows two siblings as they emerge from their bunker six years after a lethal virus spread by rain wipes out almost everyone in Scandinavia. The duo joins a group of survivors and travels to Sweden in search of their father—who they believe can cure the disease—and other signs of life. Along the way, the group struggles to cope in the post-apocalyptic world and find that the only thing from their former lives that remains is their humanity—their ability to feel fear, love, and grief.

While The Rain is the first original Danish series to stream on Netflix, it isn’t particularly groundbreaking within its own genre. Viewers will immediately be able to draw comparisons between it and American TV series The Walking Dead—except the infected people just die and don’t look like zombies—and other post-apocalyptic stories. The advanced technology used throughout the series makes it slightly reminiscent of The Hunger Games, as well, except there’s no totalitarian government (that we know of) that’s responsible for the lethal rain.

But it’s lack of originality doesn’t hinder its ability to hook viewers into the story almost immediately. The Rain wastes no time with character development or backstory in its first episode but instead plunges viewers into chaos as it follows protagonist Simone (Alba August) as she is frantically pulled out of school by her father, who insists they must leave Denmark before it begins to rain. As Simone and her family flee to an underground bunker, images of giant, deadly raindrops flash every few moments—building suspense and setting the tone for the remainder of the first few episodes. Each episode also ends on a cliffhanger, ensuring that season 1 is certifiably binge-worthy.

Early in the series, the story centers around Simone and her brother, Rasmus (Lucas Lynggaard Tønnesen), but the duo is quickly joined by an ensemble of other young adults merely trying to survive and find food. While Simone and Rasmus’ decisions propel the plot forward, the colorful supporting cast adds insight into what humanity looks like after the world as we know it comes crashing down.

Unlike the siblings who were sheltered inside a bunker for six years, their new allies have been out witnessing trauma—and it shows, when they can kill infected individuals without a second thought as Simone can barely look at a starving child. These characters are willing to lie, seduce, and coerce anyone to get what they need to survive—bringing into question what humans are capable of doing when they have lost everything.

It’s worth noting that The Rain was filmed entirely in Danish, but was later poorly lip-dubbed for English speaking audiences. Netflix has recently had a knack for acquiring some truly compelling foreign dramas—including Babylon Berlin and Travelers—and it’s clearly hoping to use its streaming power to propel foreign TV into the mainstream. The Rain probably doesn’t have the power to be that successful because of its generic plot, but it is a tremendous step in the right direction for the platform.

Thus far, it doesn’t look like The Rain will bring anything new to the dystopian thriller category—but that shouldn’t stop fans of the genre from immersing themselves into the fictional Scandinavian world it presents and enjoying the show’s top-notch storytelling.