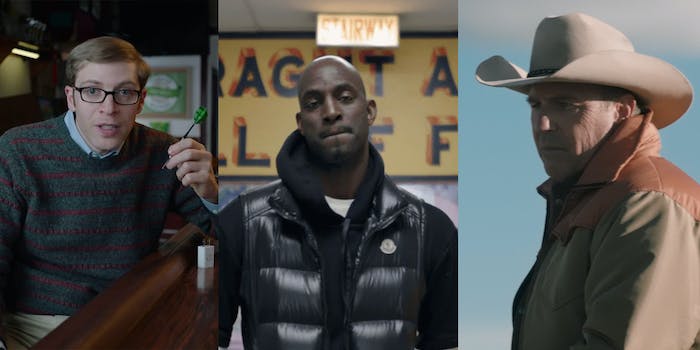 Things to watch in the season of thanks.

Sling TV is one of the most popular ways to live stream your favorite channels after cutting the cord. Its a-la-carte approach to building your streaming channel suite is inspired, not to mention one of the most affordable streaming solutions available. Still, when presented with countless channels, there’s still the question of “what should I watch?” We’ve compiled a handy watch guide for the best movies and shows coming to Sling TV channels this month.

Airs Thursday, November 25 at 9am on NBC

While mom is basting turkey and whipping potatoes, the rest of the family should put something wholesome in their eyes in her absence. The underrated part of this familial ritual are the characters featured. There’s a good chance grandma and grandpa won’t recognize Pikachu and Eevee. But don’t laugh too hard. Surely, there will be some zoomer characters that will leave you baffled.

Kevin Garnett: Anything is Possible

Basketball superstar Kevin Garnett was destined for greatness. This new documentary chronicles Garnett’s journey from teenage phenom to game-changing pro. Plus, a deep dive into the lasting effects his actions had on the NBA, along with the cultural debate that’s still in the zeitgeist.

Joe Pera Talks With You Season 3

If you could take the cozy, friendly hot-dish attitude prevalent with many midwesterners and boil that down to its essence, you’d get Joe Pera. This guy loves teaching choir at the local middle school, going to fish frys, lives for crisp fall days, and is so inoffensive, he makes Jerry Seinfeld look like Andrew Dice Clay. And despite being so clean you can watch it with church ladies, it’s at home on Adult Swim. If you get it, you get it. If you don’t, my sincerest condolences.

Kevin Costner is one of the more polarizing movie stars whose career has more peaks and valleys than a Six Flags coaster. But the guy has some serious chops, and his latest dramatic venture Yellowstone is proof positive. It’s a little Dallas, a little House of Cards, with the backdrop of one of the most scenic places in the continental US. If that doesn’t make for good appointment television, I’m not sure what does.

Here’s a list of the new shows and movies coming to Sling in November along with the channel they air on. Some channels require optional add-ons to watch. To watch local channels like ABC, CBS, and The CW on Sling TV, you will require the AirTV add-on. You may also access those using a separate antenna.

How to Get Sling TV

You can get Sling TV with one of their two available cable packages, Sling Orange and Sling Blue, each of which costs $35 per month. There’s also the third option of getting Sling Orange + Blue for just $50 per month. You’ll get more Sling TV channels by choosing Sling Blue, with its 40 channels including sports favorites like FS1 and NBCSN and cable mainstays like Food Network and Discovery Channel. But Sling Orange brings must-haves Disney Channel and ESPN as part of its package. Sling also has a number of add-ons, including robust international packages organized by languages all over the globe