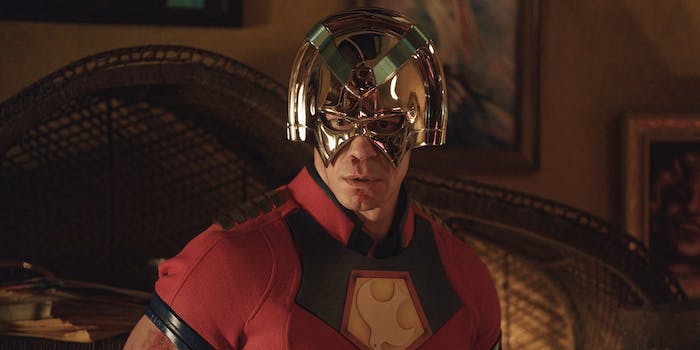 ‘Peacemaker’ is just as absurdly fun as ‘The Suicide Squad’

John Cena is front and center in 'The Suicide Squad's spinoff.

Out of all of the anti-heroes and supervillains that James Gunn stuck together on an island in The Suicide Squad, it was John Cena’s Peacemaker, who was so committed to peace that he doesn’t care “how many men, women and children I kill to get it,” that Gunn decided to pluck out of the lineup and place into his own HBO Max spinoff series. As part of the Suicide Squad, Peacemaker was the antagonist who followed Amanda Waller’s (Viola Davis) order to the letter; he didn’t even hesitate in shooting Rick Flagg (Joel Kinnaman). Given another chance, both literally and figuratively—Gunn changed his mind about killing Peacemaker off during lockdown and shot that post-credits scene after HBO Max greenlit the series—Peacemaker (also known as Christopher Smith) isn’t always so sure about that mantra.

It’s that existential crisis that’s often at the center of Peacemaker, which doubles down on the raunchiness, gross-out humor, and gore that appears in The Suicide Squad (but with just a fraction of the budget). Peacemaker is a pointed exploration of trauma and toxic masculinity functioning within a largely fun satire of superhero shows out there (although it functions just as much as one of those superhero shows). Some of the jabs fall flat, and sometimes the show’s gags stay long past their welcome, but chances are, if you were on board with Gunn’s Suicide Squad, you’ll probably be on board with Peacemaker, too. (I’ve seen seven of the show’s eight episodes.)

Peacemaker takes all of its main character’s eccentricities and throws Peacemaker’s specific brand of chaos into a new task force he’s made to join by Waller or else be returned to Belle Reve. John Economos (Steve Agee) and Emilia Harcourt (Jennifer Holland), who were part of the contingent who took Waller out in The Suicide Squad’s final act, are now on the ground and see this new job as punishment for their coup. Leota Adebayo (Danielle Brooks) joins in as a new and reluctant agent seemingly in over her head but with a few secrets to hide. Clemson Murn (Chukwudi Iwuji) is the team’s leader who has little patience for the team’s frequent antics. While not officially part of the team, Vigilante (Freddie Stroma), an awkward Peacemaker fanboy with links to his past, worms his way in. And then there’s Eagly (a wholly wonderful CGI creation), Peacemaker’s pet eagle whose name—and the lack of originality behind it—become a recurring jab toward Peacemaker.

Their main objective is an off-the-grid mission called Project Butterfly that involves at least one high-level government official, and Peacemaker immediately responds to it by asking if there’s a literal Mothra involved given the naming system of Project Starfish. But even before the true nature of Project Butterfly’s threat is revealed—and it takes several episodes to do so, leaving us with questions that Peacemaker himself takes his sweet time in trying to figure out—Peacemaker has another problem on his hands: his image. Jamil (Rizwan Manji), a janitor who encounters Peacemaker in the hospital early in the first episode, calls him “that racist superhero.”

But his father Auggie Smith (Robert Patrick), who shaped Peacemaker into who he is (fucked up worldview and all) and even designed his chrome helmets, is a white supremacist who has no interest in repenting any of those views and uses every chance he gets to put down any of the show’s POC characters he encounters. While Patrick fully commits to portraying the many layers of Auggie’s awfulness, seeing him continually throw microaggressions gets grating, even when the only reason they’re being tossed out is to set up retorts from the other characters.

Peacemaker, a character that Gunn once described as an “alt-right douchebag,” is at a crossroads. He still has no issues with killing when he has to, but maybe his philosophy needs a bit of fine-tuning versus the more traditional hero-like transformation that another show is giving its titular character. “I used to think that God put me here for a purpose. For peace, and how I said I didn’t care how many people I needed to torture or kill to get it,” he tells Vigilante in the show’s second episode. “But…you know, lately, I’m just thinking I’m a fucking maniac. I’m having, feelings, about things.”

The result is a little less alt-right but plenty of douchebag. He’s still constantly throwing jabs and giving his team nicknames (for example, he quickly focuses on Economos and calls him “Dye Beard”), sharing nonsense he learns from random people on the internet such as Superman’s poop fetish and Aquaman’s preferences, and he keeps namedropping random villains he’s encountered like Kite Man (who some viewers might know via the animated Harley Quinn series). And, like Peter Quill before him, Peacemaker is keen on his music—except instead of classic rock hits from the ’70s and ’80s, he’s more into glam metal; in one episode, before he tries to exit an apartment without notice, he ransacks the vinyl collection.

Peacemaker is a lot, but Gunn’s scripts (he wrote the entire series and directed five of the episodes) really play into Cena’s strengths, so you begin to understand how he warms himself up to the group to eventually be seen as an asshole only 85% of the time.

Did we really need a Peacemaker show? Maybe not. It doesn’t go much beyond the surface, but there’s plenty of entertainment to go around, complete as it gives Brooks and Stroma chances to flex their comedic muscles. But above all of the humor, the gore, and stylistic action sequences, the thing that might make the series worth pressing play is its opening credits. Set to the glam metal band Wig Wam’s “Do Ya Wanna Taste It” amid ’80s neon lights and an aesthetic that’s reminiscent of a certain era of yearbook photos, it’s 80 seconds of joyously awkward dancing by the cast that gets better every time you see it—and if there’s any justice in the world, will spark thousands of recreations on TikTok.

But it’s also as much an encapsulation of what makes Peacemaker so fun to watch: It delivers what you’d expect, but when it doesn’t, it can be just as rewarding.

The first three episodes of Peacemaker are now available to stream on HBO Max. Subsequent episodes drop every Thursday.