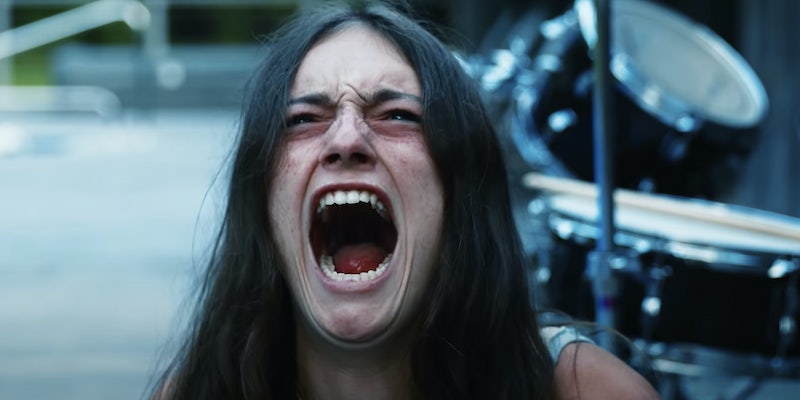 Aside from plenty of classic horror films, Shudder has some fantastic originals. Here are the best Shudder original movies.

It’s Halloween season, and you know what that means! If you’re a fan of horror flicks, you need to get watching. And what better place to check out independent, diverse horror films than Shudder. The streaming network has tons of horror movies ranging from demonic possession films to haunted house movies to zombie flicks. Here are some of the best Shudder original movies you can check out right now. Just turn off the lights, grab a blanket, and get ready to be scared.

Would you wear a harness and allow yourself to be chained to the floor if someone paid you? That’s the question posed in Caveat, a film featuring an amnesiac drifter who agrees to be imprisoned in a house on a remote island.

Isaac has partial memory loss and needs money badly. So he agrees to “babysit” for his landlord’s niece. When he arrives at the house, though, things are not as they seem. Because of Issac’s memory loss, he is not the most reliable narrator — but neither are the other characters in this spare, haunting film.

This Thai documentary-style tale of possession is also a story about generational trauma. Nim is possessed by the spirit of Ba Yan, a local deity who has been possessing women in Nim’s family for years. Nim’s niece, Mink, on the other hand, attends Church with her mother. However, when Mink starts acting strangely, it’s up to Nim to figure out what is going on and help her niece.

There are so many stories about possession from a Christian perspective — this film feels fresh because of the uniqueness of Thailand’s culture and religious practices. With a dark plot and violence, this film is definitely a disturbing addition to the possession and exorcism genre.

Izzy and her mother live in the woods and have very little contact with the outside community. They do all sorts of cool mother-daughter things, like write music in their own rock band and hike through the woods. One day, Izzy makes a new friend who introduces her to a more typical teenage life and teenage activities.

After Izzy ingests a worm in a drink, she begins to act differently. Under pressure, her mom reveals the secret lineage of their family and has to cope with her teenage daughter’s burgeoning power as the two face off in a struggle that is supernatural but also very relatable if you have a teenager.

Three mercenaries flee a coup in Guinea-Bissau with a Mexican drug lord and need to stash their stolen gold and keep a low profile until their plane can be fixed. They decide the perfect place to take refuge is a resort in the coastal region of Saloum in Senegal. Now, this isn’t a luxury resort, and there are suspicious people who may be out to harm the mercenaries or turn them into the authorities. Chaka, one of the mercenaries, has a secret past, too — and ancient, malevolent spirits might be just around the corner.

What would you do if your child disappeared literally right before your eyes? The Woods family moves into a new home (well, an abandoned home in Ireland), and things go bad right away when her daughter Abby vanishes in the basement. As Abby’s mom struggles to try and figure out what’s happening, she uncovers the possibility demonic forces could be at work — and that their new home could be a portal to Hell.

This Shudder-produced documentary is based on the book Horror Noire: Blacks in American Horror Films From the 1980s to the Present by Robin R. Means Coleman. Featuring interviews with horror film icons such as Jordan Peele, Horror Noire provides a fascinating look at how Black horror film has evolved over time. Some of the films dissected? King Kong, Night of the Living Dead, Candyman, Tales from the Hood, and Get Out. Informative, entertaining, and fascinating, this documentary is a must-see for any horror fan.

Talk about a dysfunctional family: Lucas and his brother Tom live alone in squalor. Their mother and abusive father are both dead. For fun, the brothers play a game called Slapface, which — you guessed it — involves them slapping each other in the face.

Lucas is the target of bullies and doesn’t have many friends — so he becomes friends with a monster instead. The monster is basically one of the only kind creatures in this film, but will Lucas’ relationship with the mysterious entity also turn him into one?

Creepy patriarch Josiah sees a vision of his dead wife burning in Hell. Meanwhile, people are interested in purchasing the land his decrepit farm sits on in order to find oil. This prompts his two children to come back home where he lives with their brother.

If you’re a fan of the Southern Gothic genre, this movie is for you. Broken up into three parts, What Josiah Saw is so filled with familial dysfunction, taboo, and abuse it gives Faulkner a run for his money.

Wes is down on his luck. Things with his girlfriend have ended, and he just wants to get drunk. He ends up in the bathroom, where someone in a stall strikes up a conversation with him. That’s where things start to get very, very weird — cosmic deities, father issues, glory holes—H.P. Lovecraft couldn’t have imagined this in his wildest dreams.

In the pandemic age, we’ve all gotten accustomed to living life over Zoom. We have parties, cocktail hour, poetry readings, and family reunions. But some people have seances.

In Host, a group of friends hire a medium for their Zoom call. But things take a turn for the worst when a demonic spirit gets loose and begins to torment them. The film was set up during quarantine, and the director had to instruct the actors remotely, leaving them to set up their own cameras.