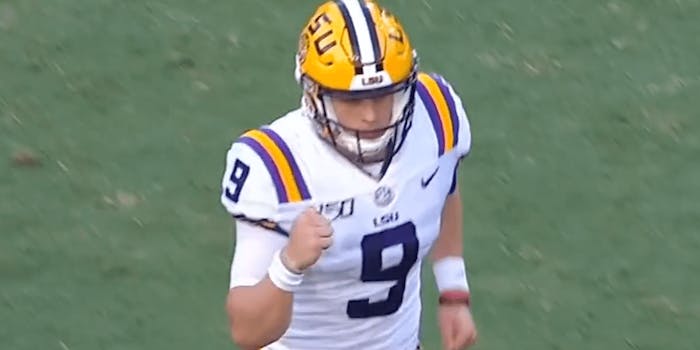 Will Clemson, with QB Trevor Lawrence and a top-ranked defense, finally be the team that derails Joe Burrow, LSU's Heisman Trophy-winning quarterback?

The top two teams in the country square off in New Orleans at the Mercedes-Benz Superdome on Monday as the No. 3 Clemson Tigers face No. 1 LSU Tigers for the College Football Playoff National Championship presented by AT&T.

After bumping Kelly Bryant to the side, and becoming the starter in Week 5 last season against Syracuse, true sophomore QB Trevor Lawrence (250-370, 3,431 yards, 36 touchdowns, 8 interceptions) has won every game he’s played–including a dominant performance in the 44-16 national championship win over Alabama last season.

Clemson trailed Ohio State in the CFP semifinal matchup, the Fiesta Bowl, with less than three minutes left before Lawrence marched the Tigers from his own 6 yard line to nail the 29-23 triumph. Though rarely showing it in the regular season, Lawrence ran with authority, rushing for 107 yards with a score. The top-ranked Clemson defense held Ohio State to its fewest points of the season.

Many pundits and critics openly questioned Clemson, right up to the final whistle of a close 21-20 win at North Carolina. But since that game–Week 5 once again being the turning point–Lawrence and the Tigers have scored 49.3 points per game while allowing only 11.2 points per game. Clemson hasn’t given up three touchdowns in a single game and leads the country in scoring defense, allowing just 10.6 points per game.

That said, with all due respect to Ohio State and last season’s Alabama team, Clemson hasn’t faced any team within the realm of LSU’s firepower. Clemson will score points on LSU’s defense, which has issues with a consistent pass rush and containing on the back end. It’s allowed 221.7 passing yards per game and gives up 21.2 points per contest. However, LSU’s offense puts up 48.9 points per game on 564 total yards per game.

Heisman Trophy winner Joe Burrow (371-478, 5,208 yards, 55 touchdowns, 6 interceptions) dominated Oklahoma in the Peach Bowl, completing 21 of 27 passes for 403 yards and seven touchdowns—in the first half. It is highly unlikely Burrow will put these sorts of numbers up on Clemson for a whole game. However, so far no team has been able to stop him, either.

He had 8 total touchdowns.

Clyde Edwards-Helaire (199 CAR, 1,304 yards, 16 scores) played sparingly in the Peach Bowl due to an injury. Given the light workload, and the extended break heading into the championship game, he will be ready to go for Clemson.

Here’s how to watch the CFP National Championship presented by AT&T.

How to stream Clemson vs. LSU live: Watch the CFP National Championship

Joe Burrow’s story is among the greatest in the last 20 years: A Southeast Ohio kid fought to become a known entity, became a four-star recruit that played parts of 10 games at Ohio State, and then had to transfer to LSU to get a chance.

What does he do? Burrow turns in one of the best seasons any FBS-level quarterback has ever produced and picks up trophies with “Heisman” and “Maxwell” on them along the way. It’s the stuff legends are made of. He’s got one game left to solidify his name in the history books.

This was a direct message that Joe Burrow sent to a recruiting analyst back in 2013… fast forward.