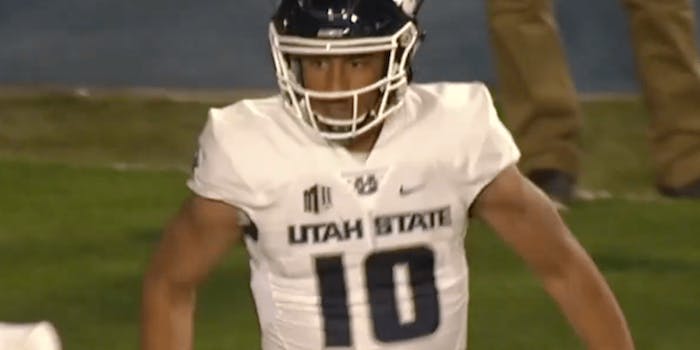 How to watch the Tropical Smoothie Cafe Frisco Bowl online

Utah State quarterback Jordan Love is headed for the NFL. But first, a showcase.

The Utah State Aggies (7-5) represent the Mountain West Conference in taking on the Kent State Golden Flashes (6-6) from the MAC (Mid-American Conference) on Friday in the Tropical Smoothie Cafe Frisco Bowl, just outside of Dallas.

Kent State is the only Division I/FBS school to win its final three games to become bowl eligible, coming off a punishing non-conference schedule which included road games against Auburn, Wisconsin, and Arizona State–all top 25 teams. Junior quarterback Dustin Crum led the Golden Flashes in both passing and rushing–2,336 passing yards and 560 yards on the ground–with 23 total touchdowns.

Utah State arrives in Texas with great intrigue surrounding its starting quarterback. Jordan Love was cited on possession of marijuana on Tuesday and his status for the game is unknown—he’s ultimately expected to play. All the same, the Aggies will lean heavily on running backs Gerold Bright and Jaylen Warren, who have combined for 1,388 rushing yards and 13 scores.

Here’s how to watch the Tropical Smoothie Cafe Frisco Bowl.

How to stream Utah State vs. Kent State live: Watch the Frisco Bowl

Frisco Bowl: Why it matters

Simply put, Utah State chances will live and die with the availability of Love, who has declared for the NFL draft after passing for 8,283 yards and 57 touchdowns in three seasons. He has an NFL future and the matchup with Kent State is a final showcase for evaluators.