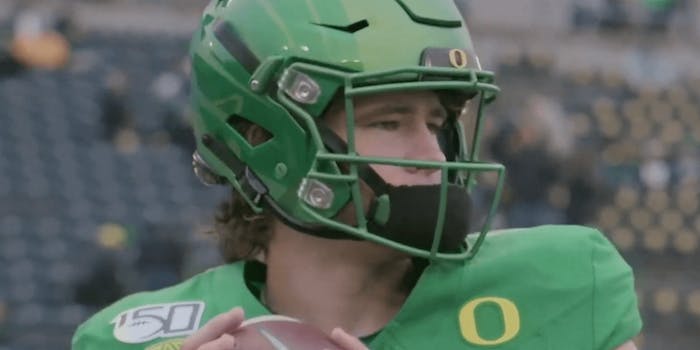 How the watch the Rose Bowl live online

Wisconsin running back Jonathan Taylor has 1,909 rushing yards and could become the first in 24 years to reach 2,000 yards in consecutive seasons.

In a battle of strength vs. strength, No. 6 Oregon Ducks (11-2) will battle the Big 10 delegate No. 8 Wisconsin Badgers (10-3) at Rose Bowl Stadium in sunny Pasadena, California, for “The Granddaddy of Them All,” the Rose Bowl Game presented by Northwestern Mutual.

Oregon and Wisconsin are ranked back-to-back for scoring defense: Oregon is No. 9 in the country at 15.7 points allowed per game, and Wisconsin No. 10 at 16.1 points per game allowed. The Zack Baun–led Badgers, though, are No. 8 in FBS in total defense, allowing about 37 fewer yards a game that the 23rd-ranked Ducks defense.

The Ducks will need their 11th-ranked rush defense to put in a masterful performance. Wisconsin’s All-American running back Jonathan Taylor has rushed for 1,909 yards for the season and could become the first player in over two decades—since Iowa State’s Troy Davis in 1995 and 1996—to reach 2,000 yards in consecutive seasons.

“You just got to pursue to the ball and you got to gang tackle,” said Oregon defensive back Thomas Graham Jr., ESPN reported. “He’s a running back that is special in so many ways. I think he’s like top five in the nation in broken tackles [and] his offensive line blocks [with] very good form.”

Here’s how to watch Wisconsin vs. Oregon in the Rose Bowl Game presented by Northwestern Mutual.

How to stream Oregon vs. Wisconsin live: Watch the Rose Bowl

Wisconsin edge Zack Baun has significantly improved his draft stock and will attempt to make the most of the bowl game by being a force against Oregon’s talented offensive line. He’s had issues staying on the field for the Badgers, so any tape—especially against decent-to-good offensive lines—is crucial for his draft positioning.

Baun having a great day does not equal a Wisconsin win because he’s not necessarily unblockable, requiring consistent double teams, but it will help considerably.

Wisconsin EDGE and Senior Bowler Zack Baun is probably the player who has exceeded my expectations most on final film review.

Bend isn't great, but when you can soften rush angles and force OTs into recovery position as quickly as Baun does, you don't need elite bend!