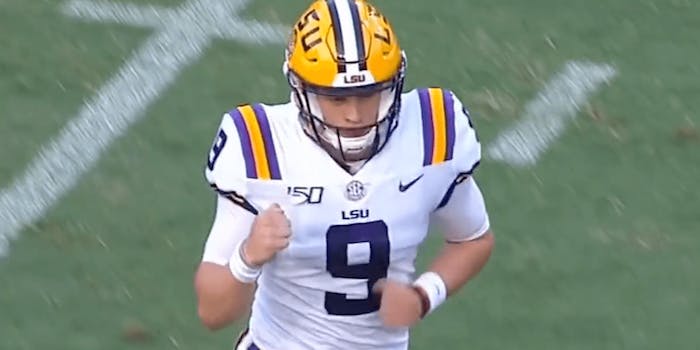 How to watch the Chick-fil-A Peach Bowl live online

LSU head coach Ed Orgeron said he isn't sure if running back Clyde Edwards-Helaire will play in the College Football Playoff semifinal against Oklahoma.

For the first semifinal in the College Football Playoff, No. 4 Oklahoma Sooners (12-1) travel to Atlanta as Big 12 champions to take on No. 1 LSU Tigers (13-0) in an afternoon matchup at Mercedes-Benz Stadium in the Chick-fil-A Peach Bowl.

The numbers and tape say it all. If you’ve watched any game with either team, it’s easy to see a high-level offensive explosion. Heisman Trophy–winner quarterback Joe Burrow leads LSU, which ranks third in the country (FBS) in scoring (47.8) and first in yards (554.3). Oklahoma, captained by dual-threat quarterback Jalen Hurts, sits just behind his opponent, with per-game averages of 43.2 points and 554.2 yards.

Fireworks will come early and often. However, the game might be about who is and isn’t available.

“Clyde has not practiced yet,” Orgeron told ESPN. “He ran a little bit [on Wednesday] straight ahead. Medically, I hope he’s cleared today to practice. I don’t know if he will. I think he may try something today, I’m not sure. I think it’s going to be a game-time situation.

Here’s how to watch Oklahoma vs. LSU in the Chick-fil-A Peach Bowl.

How to stream Oklahoma vs. LSU live: Watch the Peach Bowl

Chick-fil-A Peach Bowl: Why it matters

With Clyde Edwards-Helaire not likely to get much action, expect LSU to go with a committee approach to include redshirt freshman Chris Curry, Joe Burrow, and true freshmen Tyrion Davis-Price and John Emery Jr.

Oklahoma has its own significant issues with starting defensive end Ronnie Perkins suspended for the game and starting safety Delarrin Turner-Yell out for the season after breaking a collarbone in practice. Turner-Yell’s 75 total tackles rank second on the team. Oklahoma’s 33rd-ranked run defense (FBS) allowed 132.08 yards per game.