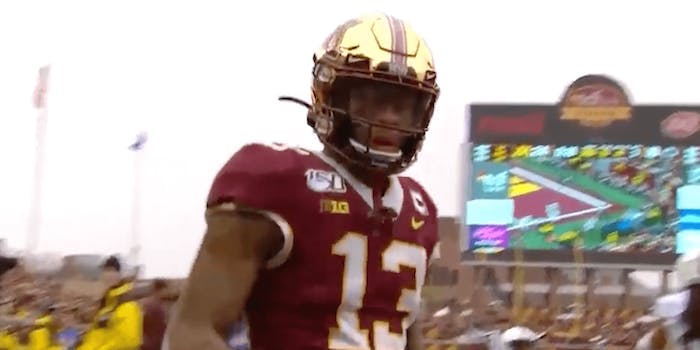 How to stream the Outback Bowl live online

Minnesota and Auburn will match up entertaining teams, each with top-20 defenses. But can the Gophers scheme around Tigers defensive tackle Derrick Brown?

Representing the Big 10, No. 18 Minnesota Gophers (10-2) travel out of the cold to take on Southeastern Conference delegate No. 12 Auburn Tigers (9-3) at Raymond James Stadium in Tampa, Florida, in the Outback Bowl.

Minnesota, a resurgent program under head coach P.J. Fleck, is searching for a signature win—one that would define the program to the nation and recruiting bases they desire. Quarterback Tanner Morgan (191-289, 2,975 yards, 28 touchdowns, 6 interceptions) has been better than steady, especially when he can consistently get the ball to playmaker Rashod Bateman (57 catches, 1,170 yards, 11 touchdowns).

The Gopher defense is stout and actually ranks higher than Auburn in total defense: 14th and 19th, respectively. Auburn, though, has probably the single-best player in the game in defensive tackle Derrick Brown, who will likely be picked in the top five during the 2020 NFL draft.

Digging into the defensive stats, offenses are converting just 30% of third-down conversions on Auburn, besting the Gophers’ 38%. Converting a few of these would put Minnesota in position to overcome the slight depth and size deficit.

Here’s how to stream Minnesota vs. Auburn in the Outback Bowl.

Hey, @AuburnFootball Tiger & @GopherFootball Gopher fans are you ready for #FootballInParadise ?! Get your tickets now 👉

This #TampaBayTreasure is ready for all of you to invade the bay so get your tickets before it’s too late!https://t.co/J1aOrCFQh6 pic.twitter.com/4nmlNBJhp2

How to stream Minnesota vs. Auburn live: Watch the Outback Bowl

Minnesota would do well to keep Auburn defensive tackle Derrick Brown from destroying its interior linemen. The unanimous All-American is a prototypical run-stopping disruptor with the ability to go after the quarterback and run down plays from hash to hash. Watch the brief video below of his domination in pocket-collapsing.

Auburn DT Derrick Brown is one of the Best players entering the NFL Draft.

In this Play, he dominates LSU's All American OG Damien Lewis, by using great leverage and controlling the chest plates. He literally throws the OG into the QB.@DerrickBrownAU5 pic.twitter.com/njimbqkrgU