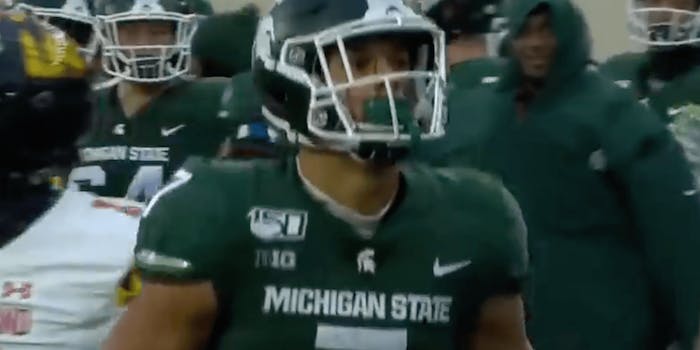 How to watch the New Era Pinstripe Bowl online

In the midst of a program downturn, Michigan State (6-6) meets with Atlantic Coast Conference delegate Wake Forest (8-4) for a Friday afternoon game at Yankee Stadium in the New Era Pinstripe Bowl.

Michigan State and Wake Forest are programs drifting in opposite directions. The Spartans were just in the College Football Playoff four years ago but have gone 26-24 since. They needed wins over Rutgers and Maryland to become bowl eligible and (somewhat) salvage their disappointing season. The reality in Lansing is that head coach Mark Dantonio isn’t pulling in the talent he once did or making future pros out of lower- and middle-tier recruits, in the vein of Le’Veon Bell.

The Demon Deacons, though, have energetic head coach Dave Clawson, who’s found talent who usually wouldn’t have Wake on their radar. Receiver Sage Surratt is one example. He won’t be available for the game, with a shoulder injury, but he will be back as one of the nation’s best receivers next season.

Wake Forest’s offense is ranked 12th in the nation at 473.4 yards a game (for 32.8 points per game). It’s an interesting attack that features fast tempo. It has the most offensive plays per game in the nation (83.7). However, its brand of read-option can sometimes take 2 to 3 seconds at the “mesh point” before decisions are made. This means the Spartans have to be patient, precise, and punishing at the point of attack.

Here’s how to watch Michigan State vs. Wake Forest in the New Era Pinstripe Bowl.

How to stream Michigan State vs. Wake Forest live: Watch the Pinstripe Bowl

Wake Forest quarterback Jamie Newman is a big, strong, physical player who’s thrived with the read-option game plan. Throughout the video below, you’ll see what Michigan State will contend with, including some highly unusual delays.