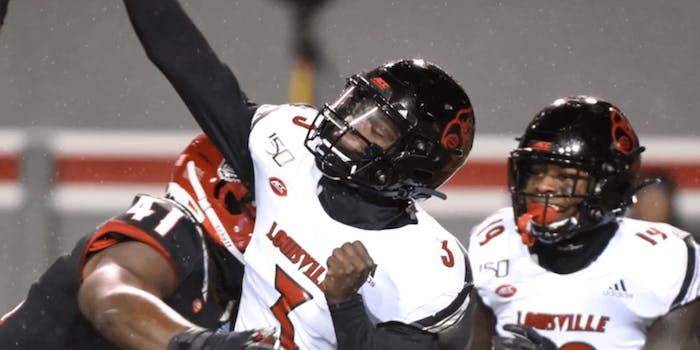 How to watch the Franklin American Mortgage Music City Bowl

If you're a fan of the running game, you're going to enjoy Louisville and Mississippi State on Monday.

In an intriguing matchup in Nashville’s Nissan Stadium on Monday, the Mississippi State Bulldogs (6-6) will represent the SEC and face ACC delegate Louisville Cardinals (7-5) in the Franklin American Mortgage Music City Bowl.

Mississippi State’s offense, led by QB Garrett Schader and RB Kylin Hill, is heavily predicated on the run, with 226.9 rushing yards compared to 176.0 passing yards per game. They’d love to slow the game down to a grinding halt and gobble up the clock, which is certainly doable. Louisville has one of the worst defenses in the country, ranking 107th out of 130 FBS teams in total defense.

Defensively, though, the Bulldogs (66th in total defense) will also have their hands full, especially on the ground. Louisville averages 32.7 points per game (40th in FBS) and 442.8 total yards per game (41st in FBS). RB Javian Hawkins finished the regular season ninth in the nation in rushing with 1,420 yards. Louisville, as a team, ran for over 2,500 yards.

How to stream Mississippi State vs. Louisville live: Watch the Music City Bowl

The following services offer a one-week trial and allow you to watch college football bowl games.

Simply put, the whole game will sit on whether Louisville can stop Mississippi from running the ball and dominating the time of possession. The Cardinals rank No. 115 nationally in rush defense (yes, 115 out of 130 FBS programs.) They give up 210.8 rushing yards per game. The extremely physical Mississippi State ranks No. 18 in FBS in rushing yards per game at 226.9. The Bulldogs will be bullies on offense; and if Louisville can’t stop them on third downs, and probably get themselves a takeaway or two, they will be serious trouble.