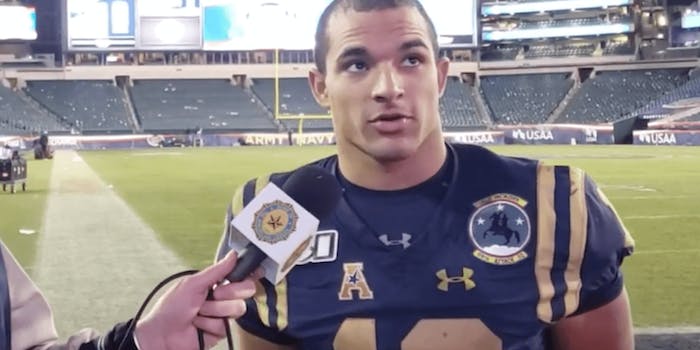 How to stream the AutoZone Liberty Bowl live online

Kansas State's chances of beating Navy come down to whether it can keep QB Malcolm Perry from consistently reaching the second level of its defense.

The run-happy Navy Midshipmen (10-2) to take on Big 12 delegate Kansas State Wildcats (8-4) in what should be one of the more intriguing bowl matchups at Memphis’ Liberty Bowl Memorial Stadium in the AutoZone Liberty Bowl.

Kansas State’s chances of beating Navy come down to whether it can keep senior quarterback Malcolm Perry from consistently reaching the second level of its defense. One of the college football’s premier game-breakers, Perry has 1,804 yards rushing so far this year, which is fourth in the nation. Honestly, there isn’t a lot more to look at here. Navy ranks No. 1 in the country in rushing, averaging 360 rushing yards per game to the tune of 39 points per contest. The Midshipmen are going to run the ball a lot, and Kansas State will have to weather the storm.

The Wildcats have the 61st-best rushing defense, giving up 152 a game. That said, Kansas State gave up 373 rushing yards in a loss to Oklahoma State earlier this season—296 to the nation’s leading rusher, Chuba Hubbard. But it has also beaten better teams: Kansas State secured a hard-fought 48-41 win over Oklahoma at home. It could be said that the Wildcats were better-equipped to beat a team like the Sooners because of the fast pace, which it won’t see against Navy.

Here’s how to watch Navy vs. Kansas State in the AutoZone Liberty Bowl.

How to stream Navy vs. Kansas State live: Watch the AutoZone Liberty Bowl

For Kansas State to have a shot, it has to control Malcolm Perry. Navy’s dynamic quarterback had a dominant game versus rival Army, against which the Midshipmen had lost three straight, rushing for 304 yards. Perry is only the fourth quarterback in college football history to rush for more than 300 yards in a game.

The most rushing yards in a single Army-Navy game. pic.twitter.com/XSqae65gfg