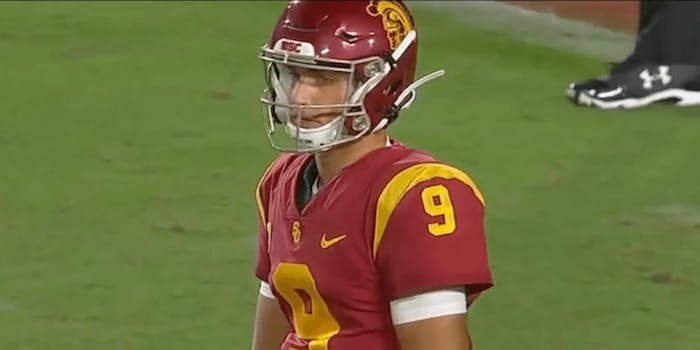 Can Iowa's elite defense slow down USC's aerial assault led by quarterback and Pac-12 Freshman of the Year Kedon Slovis?

Armed with one of the nation’s top aerial attacks, No. 22 USC Trojans (8-4) travel down I-5 South to San Diego to take on Big 10 representative Iowa Hawkeyes (8-4) for a primetime matchup at SDCCU Stadium in the San Diego County Credit Union Holiday Bowl.

USC had lucked out in a major way with the swift emergence of Kedon Slovis, a true freshman who initially backed up JT Daniels. He went from low-rated recruit to Pac-12 Freshman of the Year, passing for 3,242 yards, 28 touchdowns, and nine interceptions. Michael Pittman Jr. has looked like a future NFL star, catching 95 passes for 1,222 yards and 11 touchdowns.

The whole ball game will be on whether Slovis and Pittman can overrun Iowa’s technically sound, physical defense.

Here’s how to watch USC vs. Iowa in the San Diego County Credit Union Holiday Bowl.

Don't miss this matchup! #16 @HawkeyeFootball will take on #22 @USC_FB at the @SDCCU Holiday Bowl on December 27. Get your tickets now! #FightOn #FightForIowahttps://t.co/makPGpQoOw pic.twitter.com/iJaUJ3ZDoz

How to stream USC vs. Iowa live: Watch the Holiday Bowl

USC’s Kedon Slovis—a low-ranked-recruit-turned-Pac-12-Freshman-of-the-Year—entered the season as the backup to JT Daniels but got his chance after the latter tore his ACL. He’s taken full advantage of the opportunity, finishing the regular season with four 400-yard games in his final 5 games and a record-breaking 500-yard performance against rival UCLA.

He primed to thoroughly challenge, or even overtake, Daniels for the starter role in spring or fall 2020.

The kid is good.

Congratulations to USC QB @KedonSlovis on being named a finalist for the 2019 FWAA Freshman Player of the Year Award!#FightOn pic.twitter.com/h2VJYwgq9I