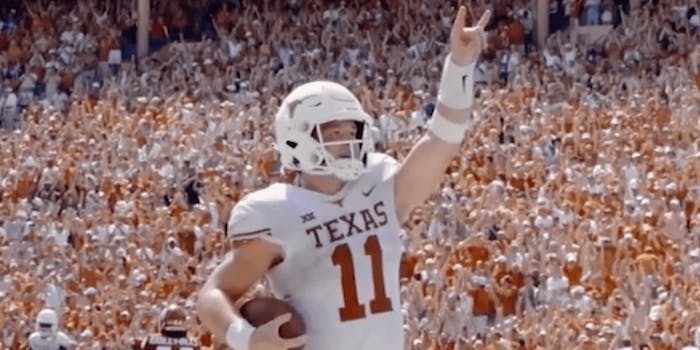 How to stream the Valero Alamo Bowl live online

Texas has had one of the worst defenses in the country, ranking in the bottom-fourth in the FBS. Does Utah have the horses to take advantage?

Utah is led by quarterback Tyrone Hundley (205-278, 2,966 yards, 18 touchdowns, 4 interceptions) and running back Zack Moss (219 carries, 1,359 yards, 15 touchdowns) in a purposefully physical attack that can sometimes be felled by quicker defensive front sevens, such in its 37-15 loss to Oregon in the conference championship game.

Utah is definitely the better, deeper team—but will it come with the desire and motivation it needs to prevent a minor upset?

Texas comes in looking to close a roundly disappointing season on an upswing. Unfortunately, Texas has one of the worst defenses in the country, giving up 446 total yards a game, good (or bad) for 108th in the country. Quarterback Sam Ehlinger (284-436, 3,462 yards, 29 touchdowns, 9 interceptions) and the Longhorns’ stable of running backs will need to assert their physicality. Devin Duvernay (103 receptions, 1,294 yards, 8 touchdowns) has been one of the country’s best receivers.

Here’s how to watch Texas vs. Utah in the Valero Alamo Bowl.

How to stream Texas vs. Utah live: Watch the Alamo Bowl

Sam Ehlinger is a weapon, but he has to stay upright for the Longhorns to have any shot. The junior has been sacked 32 times this season, the eighth-most in the country.

Who does head coach Tom Herman have to game-plan for? The big, fast guy wearing No. 6. Bradlee Anae is a future NFL dominator, currently tied for seventh in FBS with 12.5 total sacks.

.@BradleeAnae is a Consensus All-American!

He’ll suit up one more time for the Utes at the @valeroalamobowl on December 31st. #UBoyz pic.twitter.com/4HTYCMQIhZ