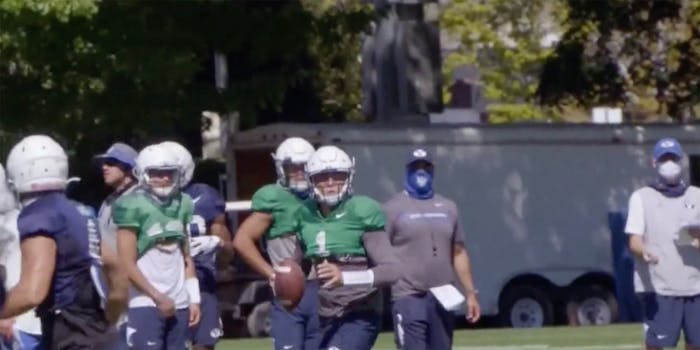 How to stream BYU vs. Navy

BYU and Navy face off in college football's opening weekend.

Here’s how to stream BYU vs. Navy live on Monday night to round out Labor Day Weekend.

Hulu Live TV’s sports coverage includes the full suite of ESPN channels (including ESPN2, ESPNews, ESPNU, and ESPN College Extra), FS1 and FS2), NBSCN, the Olympic Channel, and the Big Ten Network. You can stream BYU vs. Navy and many other college football games via the service. It’s also got you covered for news and entertainment in its nearly 70-channel package.

The Fubo channel list still includes plenty of sports, including the Fubo Sports Network, which has original programming mixing sports and humor. Fubo added the ESPN suite of channels in an agreement that also brought ABC and the Disney Channel. Pretty much every sports channel you could think of is available through Fubo, including BeIN Sports, CBS Sports Network, and TUDN. Fubo makes it easy to stream BYU vs. Navy and many other college football games throughout this season.

It’s a great option for sports fans. It comes with ESPN, ESPN2, FS1, FS2, and NBCSN at the ready. Deeper sports cuts, like NBA TV, MLB Network, CBS Sports Network, and ESPNU are also part of the YouTube TV plan. And if you need more sports, the new Sports Plus plan brings NFL RedZone and six other sports channels for an additional $10.99 per month.

This season opener came together relatively quickly and out of necessity. Navy was supposed to open the season in Dublin, Ireland against Notre Dame. But Notre Dame had to go all in on its ACC commitment—which included limiting non-conference games to in-state opponents. BYU had to scrap its season opener, the Holy Bowl rivalry game against Utah. Indeed, it had to reinvent most of its 2020 schedule.

For BYU, the big question is how an improved Zach Wilson will fare as quarterback. Wilson emerged in a three-way battle for the starting QB position. The junior put up respectable numbers last year and had his moments in a bowl loss to Hawaii.

Navy also has a new starting quarterback, with Dalen Morris replacing Malcolm Perry, who graduated and found a place on the Miami Dolphins roster. Though Morris is more of a dual-threat QB than Perry was, Navy is all about running the ball, and that shouldn’t change.

According to BetMGM, BYU is a one-point favorite over the hosts, with the over/under at 48.5.