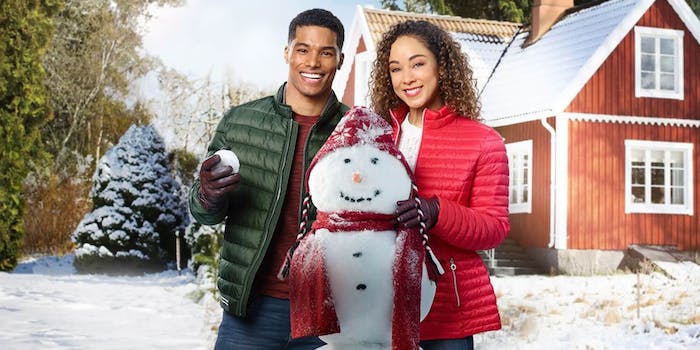 The 15 best Hallmark Christmas movies—and how to watch ’em

Hallmark Christmas movies are an American staple. Also, there are a ton of them. Here are the best ones you can watch this holiday season.

From fantastical romps through the North Pole to angst-ridden (yet still joyful) rom-coms, Hallmark has honestly bestowed us with countless Christmas movie classics. However, there are dozens upon dozens to choose from. So, we compiled a list of the very best.

Here, in order from most to least recent, are 15 Hallmark Christmas movies you should watch this holiday season.

The best Hallmark Christmas movies to watch in 2019

Time-traveling nurses. Royal princes. Furry feline friends. Anti-Christmas pacts. This selection of Hallmark Christmas movies is sure to include a little something for everyone during the holiday season.

The pressure is on for Katherine Clark, a youth choir director played by Kristin Chenoweth. The choir’s annual Christmas Eve show is around the corner, and Clark needs to write the big number. However, she finds herself distracted by a new choir boy who sings like an angel—along with his handsome widowed father.

In this Hallmark Christmas movie, Averie and Jesse are famous for the music they made together. Their duet, “Wouldn’t Be Christmas,” is mega-popular. However, Averie gave up music years ago, and Jesse is still struggling to replicate their success on his own. Could a snowy lodge reunion bring the musical act—and their hearts—together again?

It’s Christmas, and Jessica just got dumped. However, rather than mope, she’s making the most of her situation by writing Christmas cards to everyone who’s ever impacted her life. Her aunt who raised her, her military brother, her favorite pop star, her music teacher, and her best friend all get letters written from the bottom of Jessica’s heart.

Nick, a career-focused investment banker, starts off his holiday season by getting fired from his firm. To make ends meet, he starts working at a Christmas tree lot. There, he meets Julia, an astronomy teacher whose love for the stars and loving heart help Nick discover the Christmas spirit and the value in prioritizing others. Heartwarming is what Hallmark Christmas movies are about.

Cate’s mom keeps setting her up on dates. So, naturally, when she meets Gabe, she assumes he’s one more suitor. However, there’s more to Gabe than meets the eye. He’s actually a corporate recovery consultant, and he’s been hired to take a look at her candy cane company. Thankfully, their relationship is hardly business-only.

Lucy’s just been made a partner at her law firm, so her Christmas is shaping up to be the best one yet—until her sister dies. Lucy finds herself returning home for the funeral and to handle her sister’s estate. The twist in this Hallmark Christmas movie? Her entire life turns upside down once she realizes her sister’s unorthodox will changes absolutely everything.

Tom Langdon is world-weary cynic first and a journalist second. Therefore, when he gets on a cross-country train at Christmastime searching for story inspiration, he isn’t expecting much. However, Tom quickly realizes this is no normal journey as he meets the other passengers, reunites with a past love, and is forced to reflect upon himself.

Hanna works as a nurse during World War II. Without warning, she finds herself suddenly transported to modern-day Christmastime. Lost in an alien future, she meets a man who helps her learn the importance of family and the timeless meaning of Christmas—all the while making her new life a little less lonely.

Elise Donner and Nick Derr are strangers, but they have two things in common: They hate Christmas and their careers need some help. Upon meeting in a food court, these two cynics make a pact to help each other through this holiday nightmare. But their agreement stops being about business as they get to know each other—which is bound to happen in a Hallmark Christmas movie.

Desperate to give her daughter a nice Christmas, single mom Nicky Talbot can’t seem to find a job. With the aid of a mysterious man, she lands a precarious gig as a department store Santa. Unfortunately, there are forces out to get Nicky: If people find out Santa is a woman, she may just lose everything.

Emily Corrigan is kindhearted, hard-working, and madly in love with her longtime boyfriend, Leo. However, before they’re about to spend their first Christmas together, Leo confesses he’s a European prince. Emily suddenly finds herself having to face his royal family, who are willing to concoct a Christmas scheme to keep him from being with a commoner like her.

Santa and Mrs. Claus’ home, Northpole, is less a quaint fairyland and more a futuristic city. Also, it’s in deep trouble. Run by the power of holiday happiness, Northpole’s power is waning as humans become too busy to enjoy Christmas. Now, it’s up to struggling single mom Chelsea and her 10-year-old son, Kevin, to save it.

Fireman Zachary Stone isn’t super impressed by love and relationships. Then, a stray tabby cat named Ambrose shows up at his door. With Ambrose comes Marilee, a veterinary student and ardent animal-lover who helps Zachary learn to be a cat parent. Sparks fly as, slowly but surely, Zachary realizes companionship might not be the worst thing in the world.

Duncan Mayor is grumpy toward everyone but his wife, Suzy, upon whom he dotes. After Suzy gets home from the hospital, Duncan decides to give her the Christmas present of a lifetime: a ferris wheel ride in her very own backyard. However, Duncan’s lofty idea runs into some complications as he realizes his plan might not be as easy to execute as he thought.

Christmas is fast approaching, and newly widowed Seth Webster desperately needs help with his two 6-year-old kids. Unfortunately, finding a housekeeper during the holidays is nearly impossible. Enter Mrs. Merkle, a miracle housekeeper who gives him the ability to heal and find love once more.