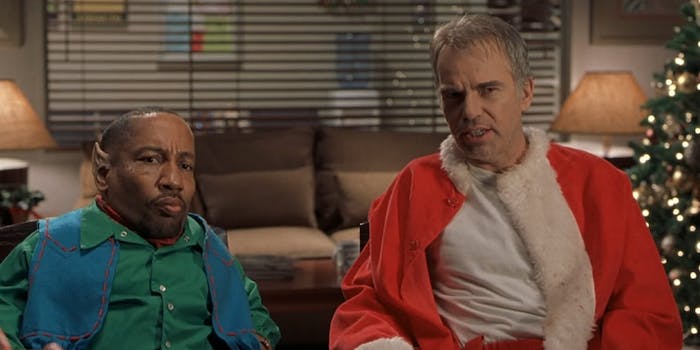 'Tis the season for streaming.

It’s always the right time of year for Christmas movies on Netflix.

Whether you’re in the mood for Christmas dramas, comedies, rom-coms, or animation, Netflix has something for you to get lost in this holiday season. Here are the best Christmas movies on Netflix.

Yes, I know it’s not cool to like Love Actually anymore. But whether you love it or hate it, it’s hard to deny that it lives up to its tagline of “The ultimate romantic comedy.” This story of intersecting relationships in London around Christmas is both one of the definitive rom-coms and one of the definitive holiday movies of our time. —Chris Osterndorf

Although the famous Irving Berlin song was first popularized in the 1942 Bing Crosby/Fred Astaire vehicle Holiday Inn, many Americans more closely associate with this 1954 classic, with which it shares a name. Crosby is back, but this time he’s paired up with Danny Kaye. The two play a song-and-dance team who fall for two sisters (Rosemary Clooney and Vera-Ellen). The plot is as silly as you might expect, but the songs, again supplied for Berlin, are wonderful, and the movie is a delightful old-timey treat to watch around the holidays. —Chris Osterndorf

Martin McDonagh’s 2008 film might unseat Die Hard as the most debated Christmas movie that’s not about Christmas. Colin Farrell and Brendan Gleeson star as two hitmen sent to Bruges to hide out after a botched assassination attempt. The gilded city is decorated for the holidays, and the film takes place before Christmas, but that’s about the extent of its celebratory tone. The film is more about boredom and guilt, and there is a lot of swearing, most of it courtesy of Ralph Fiennes as the world’s worst boss. Boredom, guilt, and swearing are really the foundation of Christmas. —Audra Schroeder

This Netflix original got some crafty PR when it debuted in 2017, and while you definitely won’t want to watch it 18 days in a row, it does make for agreeable background viewing at a holiday party. After a journalist (iZombie’s Rose McIver) is sent to cover the crowing of a new prince (Ben Lamb) in the made-up country of Aldovia, she goes deep undercover to get a scoop and ends up finding… love! Yes, the female journalist falling for her subject storyline is pretty tired, but there is some charm in A Christmas Prince’s low-budget kitsch, suspension of reality, and gaping plot holes. —Audra Schroeder

6) How the Grinch Stole Christmas

There have been many reimaginings of Dr. Seuss’ Grinch, but this one has Jim Carrey as the titular misanthrope. Directed by Ron Howard, this 2000 film also stars Gossip Girl’s Taylor Momsen as Cindy Lou Who and the great Christine Baranski as Martha May Whovier. But Carrey obviously steals the scenes here, and even though this is a kids’ movie, he’s kind of scary as the Grinch. —Audra Schroeder

BoJack Horseman is probably the most cynical show on television, and the Christmas special doesn’t fail to live up to that. Sort of a show within a show, Sabrina’s Christmas Wish finds BoJack (Will Arnett) reminiscing, as he often does, over an old episode of his sitcom Horsin’ Around, accompanied by friend/roommate/freeloader Todd (Aaron Paul). The ensuing 25 minutes are a fun diversion from the larger arcs of the series, but it still maintains its deeply bittersweet (and occasionally just bitter) tone. —Chris Osterndorf

Six hours of Norwegians chopping wood and making a fire for you to sit in front of in your pajamas. Check out Slow TV: National Firewood Morning as well. —Audra Schroeder