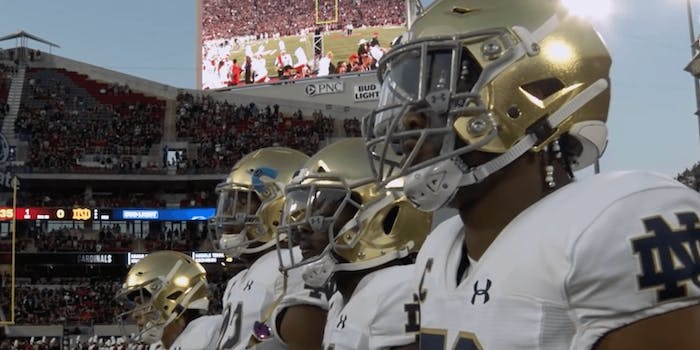 How to watch the Camping World Bowl live online

Though both Notre Dame and Iowa State have been around for at least a century, this will be the first-ever meeting between the football programs.

No. 15 Notre Dame Fighting Irish (10-2) come to sunny Orlando to take on tough Big 12 representative Iowa State Cyclones (7-5) for a Saturday afternoon matchup at Camping World Stadium in the Camping World Bowl. This will be the first time the football programs have ever faced each other, though both schools have been around for at least a century.

Iowa State is a classic case of a team being better than its record indicates and could surprise in its third-consecutive bowl appearance under head coach Matt Campbell. The Cyclones’ five losses were by total of 21 points, with one-point losses to Iowa and (College Football Playoff entrant) Oklahoma and a two-point loss to Baylor. Iowa State quarterback Brock Purdy passed for 3,760 yards, 27 touchdowns, and nine picks on a 66.3% passing percentage.

Expect a game that will be closer than it would appear on paper.

Here’s how to watch Notre Dame vs. Iowa State in the Camping World Bowl.

Camping World Bowl: Why it matters

Iowa State’s aerial attack will surely test Notre Dame’s physical pass defense in a matchup of strength vs. strength. Brock Purdy has to be able to get the ball to first team All-Big 12 tight end Charlie Kolar and underrated wide receiver Deshaunte Jones, who had 72 catches for 832 yards and two touchdowns. Wide receiver Tarique Milton is the big-play threat for the Cyclones, averaging 20.9 yards per reception.

To boot, Purdy can also run the ball himself.

Notre Dame has an edge with overall team depth, so going toe-to-toe won’t be the best idea—but big plays can keep the Cyclones in it until the end.