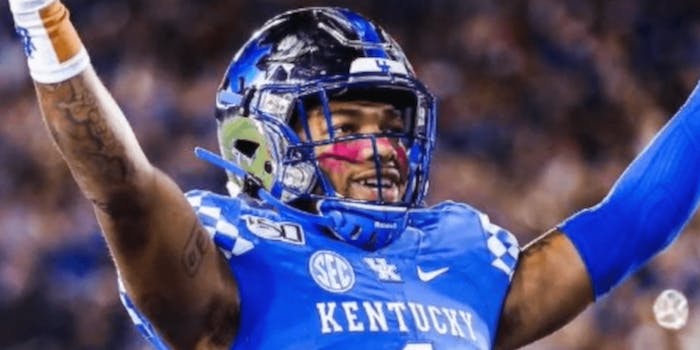 How to stream the Belk Bowl live online

Can Virginia Tech defensive coordinator Bud Foster whip up a scheme to stop Kentucky All-American Lynn Bowden Jr. in his last game as a coach?

Representing the Atlantic Coast Conference and looking to cap a resurgent season, the Virginia Tech Hokies (8-4) make a short trip to Charlotte, North Carolina, to go head-to-head against Southeastern Conference delegate Kentucky Wildcats (7-5) at Bank of America Stadium in the Belk Bowl.

Virginia Tech, as always, rests its collective hat on defense, ranked 41st in FBS at 359.9 total yards allowed per game. It allows 123.3 yards rushing and 3.68 yards per carry. In what will be defensive coordinator Bud Foster’s last stand, the game will test these last two statistics for sturdiness because Kentucky loves to run the football. And I mean, loves to run the ball.

The Wildcats are fourth in the country in rushing (274.4 yards per game), behind only the military academies (Air Force, Army West Point, and Navy). It’s a mind-bending change that head coach Mark Stoops brought to what used to be a pass-happy program in its most recent heyday, with Hal Mumme at the helm.

Leading the charge is junior All-American Lynn Bowden Jr. He started the season as a receiver and still paces Kentucky in receptions (30) and receiving yards (348). Bowden, however, made the change to quarterback after an injury to Sawyer Smith and wound up rushing for 1,235 yards and 11 touchdowns (with 330 passing yards and two additional scores tacked on).

Bowden will be the best player on the field in what could be his national coming-out party as an intriguing NFL prospect.

Here’s how to watch Virginia Tech vs. Kentucky in the Belk Bowl.

How to stream Virginia Tech vs. Kentucky live: Watch the Belk Bowl

If you’re wondering where the idea for Lynn Bowden Jr. to play quarterback for Kentucky came from, below is a video from when he was as an all-state dual-threat quarterback at Warren G. Harding High School in Warren, Ohio.