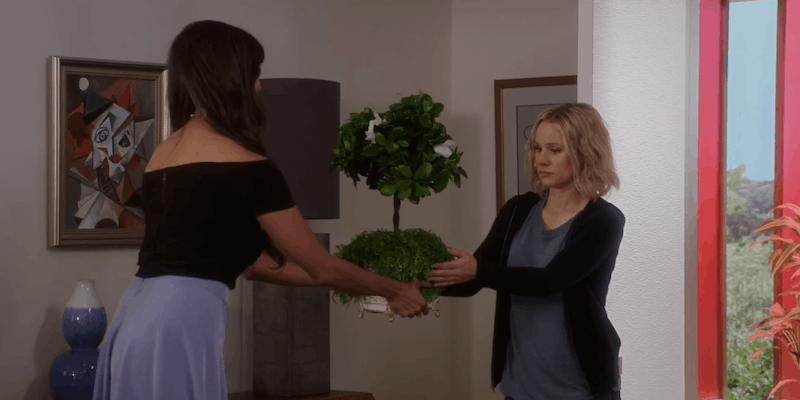 How to watch ‘The Good Place’ online for free

Catch the most addictive (and hilarious) sitcom going.

The Good Place is the most original sitcom in years, a comedy about ethics and mortality that makes you think almost as much as it makes you laugh. Kristen Bell stars as Eleanor Shellstrop, a self-proclaimed Arizona trash bag trying desperately to figure her life out after its already ended, with help from Ted Denson’s Michael, an architect of the afterlife.

We’re already halfway through The Good Place season 3, with our complicated heroes—Eleanor, Chidi, Tahani, and Jason—having already been back on Earth, in Janet’s void, and now, maybe, to the Good Place.

Here’s everything you need to know to watch The Good Place online for free.

How to watch The Good Place online for free

Luckily, all the big name live TV streaming services let you try out their services for one week, allowing you to watch The Good Place for free. There are variations among them, though, especially when it comes to the local channels offered. Depending on which service you choose, the availability of NBC in your area might vary. The links below will offer a quick primer on what channels you’ll get with each service.

Hulu with Live TV not only gives you access to on-demand content, but you’ll also be able to stream live TV, including local networks. If you miss The Good Place when it airs, no worries: It will be available on-demand along with countless movies, classic programs, and of course, original series available exclusively on Hulu. You’ll also get access to almost 60 channels, including Lifetime, ESPN, USA,  and plenty more. (Here’s the complete list of Hulu Live TV channels.)

How to catch up on The Good Place episodes

If you’re looking for a place to catch up on older The Good Place episodes, there are a couple solutions.

You can watch past episodes of The Good Place on your TV, tablet, phone, or computer with Amazon Video. Individual episodes will run you $2.99 each, but you can nab an entire season for $24.99. Once purchased, they’re yours to keep and stream wherever you stream Amazon.

While they’re a season behind, you can watch seasons 1 and 2 on Netflix. You’ll definitely want to catch up on older episodes before diving into season 3.

If you’re behind the ball on the trippiest sitcom going, you can catch select episodes of The Good Place Season 3 on the NBC website. Some of them don’t even require a cable subscription or an account to watch (but the oldest ones will require credentials from one of the live TV streaming services above).