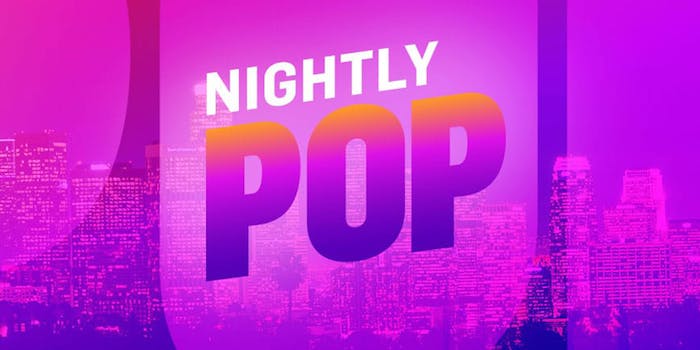 How to stream ‘Nightly Pop’

Breakdowns and takedowns of all things celeb.

Where to stream E!

Before you tuck yourself in at night, why not indulge in a big dose of the sauciest celebrity gossip of the day? Nightly Pop is a perfect night-time comedy fix.

Since 2018, the fresh and edgy late-night talk show delves deep into the latest celeb news in the way only E! can dish out. And like any great late-night show, the trendy news is paired with plenty of hilarious sketches, over-the-top games, and unfiltered drama that you can’t get away with the constraints of daytime television. Hosted by crack team Morgan Stewart, Hunter March and Nina Parker, expect the unexpected and in most cases, outrageous takes on everything celeb.

Here’s everything you need to know to stream Nightly Pop.

What is Nightly Pop?

The late-night chat show on E! premiered in October 2018.

How to stream Nightly Pop

E! is available on a handful of the major live TV streaming services. When trying to decide which one is best for you, you’ll want to weigh the cost, the other channels you’ll receive, and the compatible devices for streaming.

Hulu Live TV sets you up with local channels and has a broad spectrum of entertainment and sports channels to review, including the full suite of ESPN channels, Cartoon Network, FX, HGTV, and even deep cuts like National Geographic and Syfy, and of course E!, where you can stream hits like The Soup and Total Divas.

To watch E!, you’ll want to dock in at the FuboTV Standard level.

If you’re looking for a streamlined, cost-effective streaming package, check out Sling TV. It offers two basic cable packages, Sling Orange and Sling Blue, each of which costs $30 per month. There’s also the third option of getting Sling Orange + Blue for just $45 per month. You’ll get more Sling TV channels by choosing Sling Blue, with its 40 channels including sports favorites like FS1 and NBCSN and cable mainstays like Food Network and Discovery Channel. But Sling Orange brings must-haves Disney Channel and ESPN as part of its package. To gain access to E!, you’ll either need Sling Blue or Sling Orange + Blue. Sling also has a number of add-ons, including robust international packages organized by languages all over the globe.

If you’re already looking to AT&T for your wireless needs, you might consider AT&T TV Now to cover streaming for you. AT&T TV Now channels start with Plus and Max, which even include HBO. Then, AT&T plans expand from there, approaching cable selection and pricing with AT&T TV Now’s biggest packages. AT&T streaming also comes with Cloud DVR, letting you record up to 20 hours of TV per month. If you’re looking for E!, get in at the AT&T TV Now Plus tier to stream it.

If you’re looking for Nightly Pop, know that you can stream it on YouTube TV.