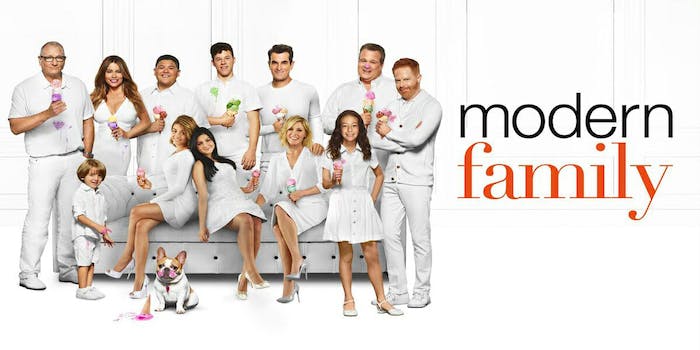 How to watch ‘Modern Family’ online for free

Don't miss out on the (likely) last season of 'Modern Family.'

What awaits the Pritchetts when Modern Family returns? In short, baby bumps, the emotional swings that come with pregnancy, and because it’s Modern Family, hilarity. Here’s everything you need to watch Modern Family online for free.

Since we last saw the Pritchett/Dunphy/Tucker family, Hayley and her boyfriend Dylan revealed that a baby was on the way. In classic Modern Family tradition, what began as a delightful surprise is about to turn into a huge twist of fate. As it turns out, Hayley isn’t having a baby… she’s having two. Sarah Hyland even revealed her behind-the-scenes baby bump on her Instagram. Unfortunately, with this new life comes potential death. Series creators Stevan Levitan and Christopher Lloyd are already planning the finale, with Season 10 likely being the show’s last hurrah.

What channel is Modern Family on?

The final three episodes of season 10 of Modern Family will air at 9pm on ABC starting Wednesday, Jan. 9.

How to watch Modern Family online for free

All of the major live TV streaming services offer a one-week trial, so you can watch the latest episodes of Modern Family for free. But they all vary in terms of which local channels they offer and their coverage areas. In some cases, a live version of ABC won’t be available; instead, the service will offer an on-demand version, allowing you to watch your favorite shows the morning after they premiered. Be sure to use the links below to see exactly which channels you’ll receive with each service.

Hulu with Live TV not only gives you access to on-demand content, but you’ll also be able to stream live TV, including local networks. If you miss Modern Family when it airs, no worries: It will be available on demand along with countless movies, classic programs, and of course, original series available exclusively on Hulu. You’ll also get access to almost 60 channels, including Lifetime, ESPN, USA,  and plenty more. (Here’s the complete list of Hulu Live TV channels.)

How to catch up on Modern Family episodes

Most of the episodes from season 10 of Modern Family are available on ABC’s site, and you don’t even need a cable subscription or an account to access them, but they won’t stick around forever (and some are already gone). For older seasons, you’ll need a better solution.

You can watch past episodes of Modern Family on your TV, tablet, phone, or computer. Individual episodes will run you $2.99 each, but you can nab an entire season for $29.99. If you’ve missed out on one of the funniest sitcoms in years, now’s your chance to catch up.