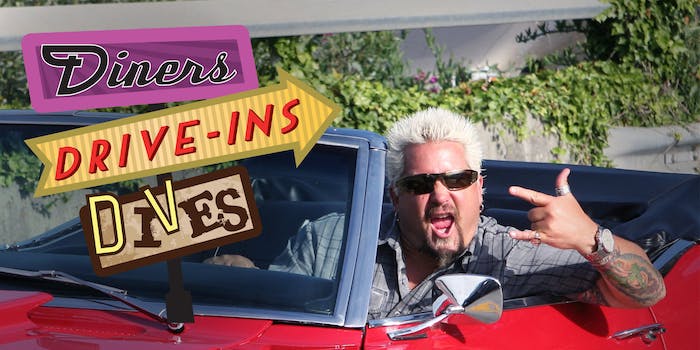 How to stream ‘Diners, Drive-Ins and Dives’

Guy Fieri is scouring the country for some grub.

It’s been more than a decade since America was introduced to a wholesome, bleach-tipped, Hawaiian-suit wearing gourmand know to most as Guy Fieri. Anytime he hits the road, you can bet there’s a new Diners, Drive-Ins and Dives on the horizon.

While Fieri is a television chef in his own right, the domain where he shines is on his road-trip reality show Diners, Drive-Ins and Dives. In every episode, Fieri samples the best eats that the country has to offer from popular downtown restaurants to hidden, off-the-beaten-path “dives.”

Here’s everything you need to know stream Diners, Drive-Ins and Dives.

What is Diners, Drive-Ins and Dives?

Also known as Triple D, Diners, Drive-Ins and Dives is began in April of 2007. Each episode highlights different restaurants across a few cities usually following a certain theme like “That’s Italian” and “All Kinds of BBQ.” Certain episodes also cover cities like London, Florence, or even the entire country of Cuba.

How to stream Diners, Drive-Ins and Dives

Food Network is available on a few of the major live TV streaming services. When trying to decide which one is best for you, you’ll want to weigh the cost, the other channels you’ll receive, and the compatible devices for streaming.

Diners, Drive-Ins and Dives on Philo

Philo is a budget-minded streaming service, and depending on what channels you want, it might be right for you. The 59 Philo channels lean decidedly toward entertainment; the Philo channel list includes AMC, Discovery, IFC, Lifetime, and the Paramount Network, all for $20 a month. If you’re a fan of Food Network, you’re in luck: You can find it on Philo. Philo also comes with free cloud DVR, but shows recorded are deleted after 30 days, so binge responsibly.

Diners, Drive-Ins and Dives on Hulu with Live TV

Diners, Drive-Ins and Dives on FuboTV

To stream Diners, Drive-Ins and Dives, you’ll want to dock in at the FuboTV Standard level.

Diners, Drive-Ins and Dives on Vidgo

Vidgo offers a package for under $40 a month that pulls together more than 60 English-language channels into its National English Package. Vidgo channels include ABC, Fox, the ESPN family of channels (including ESPN Deportes), and it’s one of the few streaming services that carries BeIN Sports. But it’s like Fubo in that, even though it started out for streaming sports, it carries a lot more now. You might be surprised to know that Vidgo’s an option to stream Diners, Drive-Ins and Dives—and then you chat about it online via Vidgo’s Social TV platform.

If you’re already looking to AT&T for your wireless needs, you might consider AT&T TV Now to cover streaming for you. AT&T TV Now channels start with Plus and Max, which even include HBO. Then, AT&T plans expand from there, approaching cable selection and pricing with AT&T TV Now’s biggest packages. AT&T streaming also comes with Cloud DVR, letting you record up to 20 hours of TV per month. If you’re looking for Food Network, get in at the AT&T TV Now Entertainment tier to stream it.

If you’re looking to stream Diners, Drive-Ins and Dives, know that you can stream it on YouTube TV.