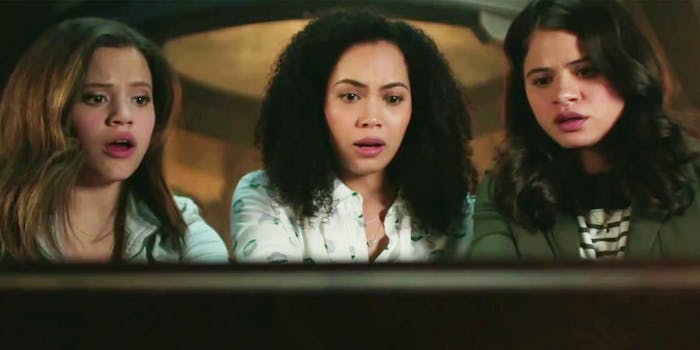 How to watch ‘Charmed’ online for free

Something wicca this way comes.

You know you’re a ’90s kid if you remember the cult supernatural drama Charmed on the WB. Last year, the CW (America’s destination for addictive teen dramas) rebooted the witchy fantasy pulp show. Set in Hilltowne, Michigan, three sisters discover that they’re powerful witches destined to protect the innocent from demons and the forces of evil. The eldest sister, science nerd Macy Vaughn, has the power of telekinesis. The middle sister, feminist activist Melanie Vera, can freeze time at will. The youngest, the loveable and bubbly Margarita Emilia Vera, can read people’s thoughts. Together, they are “The Charmed Ones,” the world’s most powerful coven of witches. Lucky for us, they’re on our side.

Here’s everything you need to know to watch Charmed online for free.

How to watch Charmed online for free

All the big-name, live TV streaming services let you try their services for one week, so you can watch Charmed online for free. There are variations among them, though, especially when it comes to the local channels offered. Depending on which service you choose, the availability of the CW in your area might vary. The links below will offer a quick primer on what channels you’ll get with each service.

Hulu with Live TV not only gives you access to on-demand content, but you’ll also be able to stream live TV, including local networks. If you miss Charmed when it airs, no worries: It will be available on-demand along with countless movies, classic programs, and of course, original series available exclusively on Hulu. You’ll also get access to almost 60 channels, including Lifetime, ESPN, USA,  and plenty more. (Here’s the complete list of Hulu Live TV channels.)

If you’re a sports fanatic, FuboTV is a streaming service built just for you. There are tailor-made packages for fans of basketball, international soccer, golf, and even rock climbing. For the rest of the family, there’s a suite of great channels including Food Network,  IFC, TBS, Cartoon Network, and more. The CW may be available in your market, so be sure to check before subscribing. (Here’s the complete FuboTV channels list.)

How to catch up on Charmed episodes

If you need to catch up on older Charmed episodes, you have some options.

You can watch past episodes of Charmed on your TV, tablet, phone, or computer. Individual episodes will run you $1.99 each, but you can nab an entire season of Charmed on Amazon for $19.99.

Select recent episodes of Charmed on the CW website, no subscription required. But new episodes disappear after a few weeks. Stream them all while you still can!