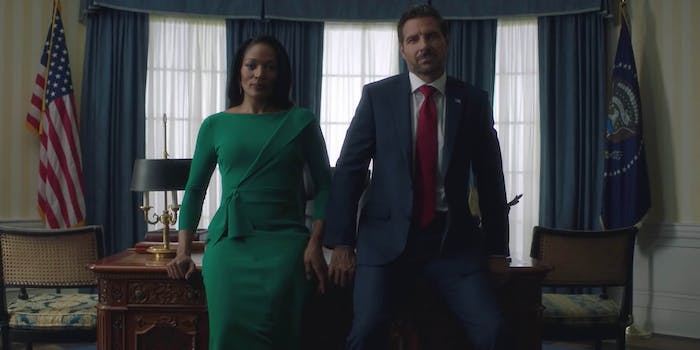 How to stream ‘The Oval’

The political genre is about to get steamier.

Hunter Franklin and his wife Victoria aren’t just an interracial power-hungry couple. They also happen to be the just elected President and First Lady. To the world, the couple and their children are a perfect example of the culmination of the American dream. But behind closed doors, the reality of the situation is far more scandalous.

From creator Tyler Perry comes a new soap opera not only focuses on the power dynamics between those that occupy the White House. The first couple complete with their volatile children are featured, but even bottom-rung staff members who work in the White House aren’t safe from the drama. It’s a little like Upstairs, Downstairs if you turbocharged the sex, depravity, greed, scandal, and betrayal.

Here’s everything you need to know to stream The Oval.

What is The Oval?

How to stream The Oval

The Oval on Philo

Philo is a budget-minded streaming service, and depending on what channels you want, it might be right for you. The 59 Philo channels lean decidedly toward entertainment; the Philo channel list includes AMC, Discovery, IFC, Lifetime, and the Paramount Network, all for $20 a month. so if you want to stream The Oval you’re in luck: You can find it on Philo. Philo also comes with free cloud DVR, but shows recorded are deleted after 30 days, so binge responsibly.

The Oval on Sling TV

If you’re looking for a streamlined, cost-effective streaming package, check out Sling TV. It offers two basic cable packages, Sling Orange and Sling Blue, each of which costs $30 per month. There’s also the third option of getting Sling Orange + Blue for just $45 per month. You’ll get more Sling TV channels by choosing Sling Blue, with its 40 channels including sports favorites like FS1 and NBCSN and cable mainstays like Food Network and Discovery Channel. But Sling Orange brings must-haves Disney Channel and ESPN as part of its package. To gain access to The Oval, you’ll either need Sling Blue or Sling Orange + Blue. Sling also has a number of add-ons, including robust international packages organized by languages all over the globe.

The Oval on FuboTV

The Oval on Vidgo

The Oval on AT&T TV Now