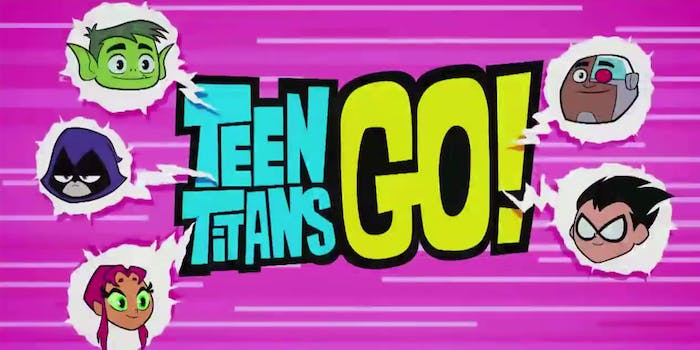 How to stream ‘Teen Titans Go’

When there's trouble, you know who to call.

Face it, the super-serious superhero genre is played out. Moody, brooding action heroes are about as entertaining as an old sock. What if heroes were a tad goofier? Teen Titans Go! takes this concept and runs with it.

Robin, Cyborg, Starfire, Raven, and Beast Boy are quite the crime-fighting team. Like a bunch of teenagers sharing an apartment in Jump City, things aren’t as cut and dry as when they’re facing off against bad guys. Roommates, am I right? The show trades a good chunk of the action for comedy, and frankly, it is better for it. And if you’re a DC superfan, you can be sure to find more than a handful of deep-cut jokes and references. If you blink, you’ll miss them.

Here’s everything you need to know to stream Teen Titans Go!

What is Teen Titans Go!?

The original show bearing the name Teen Titans ran on Cartoon Network from 2003 to 2006 but had a much more action bent to it. The show was revived under a new name and went in a more comedic route when it premiered in 2013. Teen Titans first appeared in comic book form in 1964 in The Brave and the Bold #64.

Where to stream Teen Titans Go!

Hulu Live TV sets you up with local channels and has a broad spectrum of entertainment and sports channels to review, including the full suite of ESPN channels, FX, HGTV, and even deep cuts like National Geographic and Syfy, and of course, Cartoon Network where you can stream hits like The Powerpuff Girls and Teen Titans Go!

If you’re looking to stream Teen Titans Go!, know that you can stream it on YouTube TV.