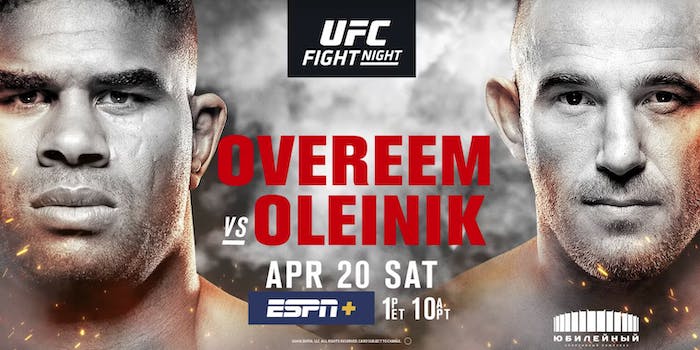 How to stream UFC Fight Night 149 for free

UFC returns to Russia for Alistair Overeem vs. Aleksei Oleinik.

When UFC returns to Russia for UFC Fight Night 149, it’ll bring a card with a distinctly national bent. And despite its early Saturday start time, you’ll be able to watch it easily and for free on ESPN+, as the broadcasting giant has made 20 exclusive Fight Night events available this year with the right TV streaming package.

The event, which will be held at the Yubileyny Sports Palace in Saint Petersburg, features Russians fighting in every one of the night’s bouts. Its main event is high-stakes, pitting no. 9-ranked heavyweight fighter Aleksei Oleinik (57-11-1) against no. 7-ranked Alistair Overeem (44-17-0). The bout starts at 1pm ET and features perhaps the event’s most intriguing storyline: Overeem, seeking to regain his place as a premier heavyweight contender, could spring up the rankings with a win. For Oleinik, he’ll look to pick up another quality victory after he defeated Mark Hunt at last year’s Fight Night 136 in Moscow.

Here’s everything you need to know to live stream UFC Fight Night 149 for free.

Overeem vs. Oleinik live stream: How to watch UFC Saint Petersburg for free

There’s only one option for watching UFC Saint Petersburg—ESPN+—and thankfully, it comes with a one-week free trial.

After ESPN inked a $1.5 billion deal with UFC in May 2018 to carry 30 Fight Nights, the company selected 20 of those events to run on its subscription streaming service, including Fight Night 149. However, that’s not the only UFC action that ESPN+ subscribers can access. In January 2019, the two sides extended their deal and designated ESPN+ as the sole provider of UFC pay-per-view events. With the purchase of one PPV event for $79.99, new ESPN+ subscribers gain an entire year of the streaming service (existing subscribers can purchase PPV events for $59.99).

In addition to UFC, ESPN+ subscribers can watch 180 out-of-market MLS matches, MLB games, the English FA Cup, tons of college sports action, and access to ESPN’s entire library of its acclaimed 30 for 30 documentary series, among other things—all for $4.99 per month or $49.99 for the entire year. Simply put, you don’t have to be a UFC fanatic to get your money’s worth from ESPN+.

ESPN+ works as an extension of the ESPN app and website. Your ESPN+ subscription will simply unlock all of the content and live events marked with “E+” logo. You can find the ESPN app on Amazon Fire Stick and Fire TV, Google Chromecast, PlayStation 4, Xbox One, Roku, Apple TV, Android TV, and iOS and Android devices.

Alistair Overeem vs. Aleksei Oleinik: Why it matters

It’s all about narratives. Overeem is looking to power his way back into the conversation as one of UFC’s premier heavyweight mixed martial artists after he lost the title fight to Stipe Miocic in September 2016. Since that loss, he’s posted a 3-2 record, with a KO over Mark Hunt in UFC 209 and a TKO against Sergey Pavlovich at UFC Fight Night 141. However, a loss against Oleinik would probably end Overeem’s ability to contest again for the heavyweight title. It’s not a fight that he’s taking lightly.

“Oleynik is very experienced and very tough—he comes forward and puts a lot of pressure on and I just need to wait for my moment and take him out,” he told SunSport. Despite the high stakes, Overeem told the British tabloid that he’s confident he’ll emerge victorious after two rounds.

Oleinik faces the same potential outcome. A win would vault him up the rankings; a loss would probably end the 41-year-old’s title ambitions. He does, however, have home-field advantage on his side, as the naturalized Russian citizen will appear in UFC’s second-ever event in Russia as a last-second replacement for Alexander Volkov. Oleinik beat Mark Hunt at UFC Fight Night in Moscow last year via submission, utilizing a rear-naked choke to take down the popular New Zealander.