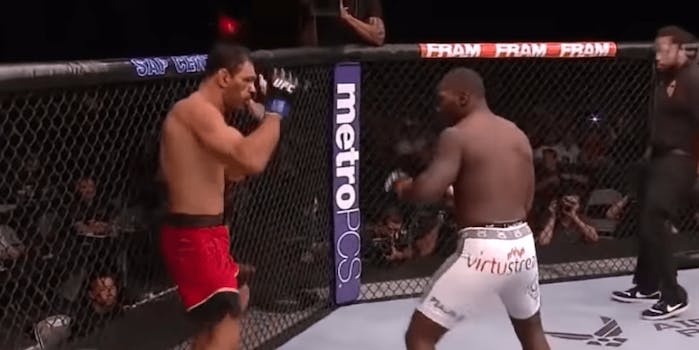 Here's what you get from UFC's streaming service.

Combat sports certainly aren’t suffering from a lack of exposure online these days. MMA fans can watch UFC events on ESPN+, and Bellator followers can view their favorite grapplers on DAZN or Paramount Network. But if you’re a hardcore UFC fan, you’re going to want UFC Fight Pass.

Along with live-action events, the UFC Fight Pass allows you take in “thousands of hours of content” that include behind-the-scenes features, backstage interviews, and other original offerings that are exclusive to the streaming service. UFC has touted the Fight Pass as “Netflix for fight fans,” and after reviewing its offerings, it’s hard to argue otherwise.

UFC Fight Pass has been live for the past five years, and it continues to thrive. Here’s everything you need to know about before subscribing.

What is UFC Fight Pass?

UFC introduced its streaming service in 2014, and it’s been a boon for hardcore MMA fans ever since. Aside from behind-the-scenes and other exclusive coverage of the biggest fights UFC has to offer, subscribers also get access to smaller, lesser-known MMA cards from around the world.

Along with exclusively showing the early preliminary matches from PPV cards (but not the PPV main card fights themselves), it also features boxing, Muay Thai, kickboxing, and other combat sports events.

You can also dig into the UFC’s library and watch past events from Pride, Strikeforce, and Invicta FC. Naturally, you can also watch replays of pretty much any UFC event you’d want to view.

“The UFC Fight Pass library is enormous and continues to grow,” UFC wrote on its site. “The Fight Pass library contains every fight in the history of the UFC, as well as the entire video libraries of over 30 other MMA/boxing/kickboxing/Muay Thai/Jiu Jitsu promotions … There are also thousands of hours of archived historical MMA programs including previous seasons of The Ultimate Fighter, Dana White’s Tuesday Night Contender Series and exclusive newly-created shows.”

Basically, if you want to watch the entire UFC careers of stars like Conor McGregor and Anderson Silva, from when they were fighting early on cards until they transformed themselves into main-event legends, UFC Fight Pass is for you.

And if you like to watch current-day live action, it streams more than 200 events per year.

How to watch UFC Fight Pass

With the exception of Brazil, it is available around the globe. You can use it on just about any device you can think of, including laptop computers, iPad, iPhone, Android devices, Apple TV, Xbox One, Xbox 360, Amazon Fire TV, Chromecast, Roku, Samsung Smart TVs, and LG Smart TVs.

Whether you’re on an iOS device, Android, or using a smart TV, just search for “UFC TV” in the app store and download to get started.

If you’re already spending $4.99 per month or $49.99 per year for ESPN+ (along with the $59.99 it will cost you to stream UFC PPVs through ESPN’s app), the UFC Fight Pass is a solid deal, assuming you’re a big-time combat sports fan.

It depends on how much you crave MMA.

If you’re a big-time UFC fan who hungers to see every single fight and you can make a 12-month commitment, $95.99 per year is a good deal. But if you’re an occasional viewer or even if you only like to buy the PPVs with some buddies but don’t really care to watch fights between grapplers you’ve never heard of, it’s probably not a service you need.

One redditor determined that, if you want to watch every televised UFC fight in a year, it’d cost more than $2,000. In that context, UFC Fight Pass offers a lot of bang for your buck.