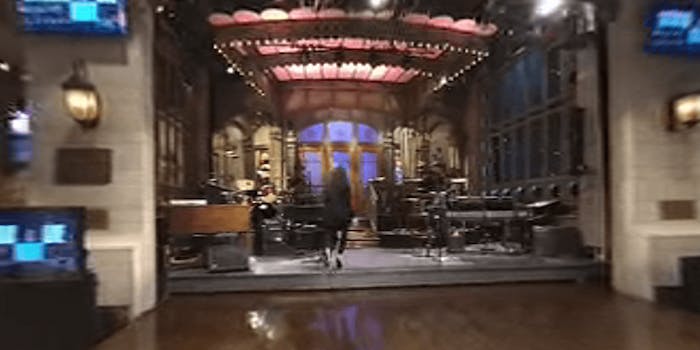 SNL will be returning from its pandemic hiatus April 11 with episode 16 of its 45th season. The episode will feature sketches from the cast members homes and a new weekend update.

Watching Saturday Night Live online without cable isn’t as easy as you might think. While all of the major live TV streaming services offer local channels at this point, that doesn’t necessarily mean you’ll be able to an SNL live stream. The availability of NBC varies depending on the service and your location.

Season 46 premiers this Saturday, and couldn’t have arrived at a better time. This election season, Jim Carrey and Maya Rudolph will be playing the top and bottom of the Democratic presidential ticket, Joe Biden and Kamala Harris, respectively. Chris Rock will serve as the host as the season kicks off, live from 30 Rock since the start of the Covid-19 pandemic.

Here’s everything you need to know to stream SNL.

What is Saturday Night Live?

Who is hosting Saturday Night Live this week?

The season 46 premier will be hosted by comedian and actor Chris Rock, with musical guest Megan Thee Stalion.

Every major live streaming service offers NBC in some capacity, but you’ll need to check if there’s a local affiliate available in your area. We’ve provided the links to do so below. Regardless, a subscription to one of the following services will allow you to live stream SNL NBC app.

SNL on Hulu with Live TV

Hulu Live TV sets you up with local channels and has a broad spectrum of entertainment and sports channels to review, including the full suite of ESPN channels, Cartoon Network, FX, HGTV, and even deep cuts like National Geographic and Syfy, and of course, NBC where you can stream SNL.

If you’re looking for a streamlined, cost-effective streaming package, check out Sling TV. It offers two basic cable packages, Sling Orange and Sling Blue, each of which costs $30 per month. There’s also the third option of getting Sling Orange + Blue for just $45 per month. You’ll get more Sling TV channels by choosing Sling Blue, with its 40 channels including sports favorites like FS1 and NBCSN and cable mainstays like Food Network and Discovery Channel. But Sling Orange brings must-haves Disney Channel and ESPN as part of its package. To gain access to SNL, you’ll either need Sling Blue or Sling Orange + Blue. Sling also has a number of add-ons, including robust international packages organized by languages all over the globe.

To watch SNL, you’ll want to dock in at the FuboTV Standard level.

If you’re already looking to AT&T for your wireless needs, you might consider AT&T TV Now to cover streaming for you. AT&T TV Now channels start with Plus and Max, which even include HBO. Then, AT&T plans expand from there, approaching cable selection and pricing with AT&T TV Now’s biggest packages. AT&T streaming also comes with Cloud DVR, letting you record up to 20 hours of TV per month. If you’re looking for SNL, get in at the AT&T TV Now Plus tier to stream it.

If you’re looking for SNL, know that you can stream it on YouTube TV.