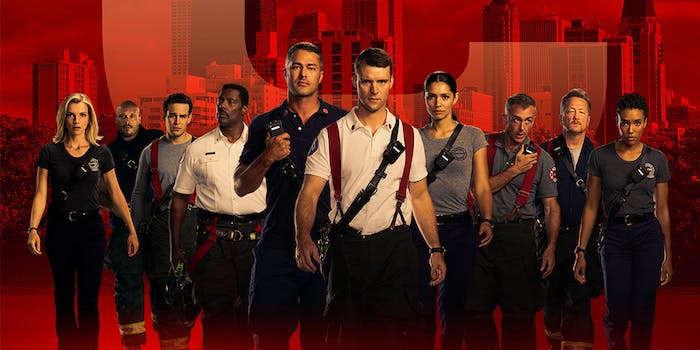 How to stream ‘Chicago Fire’

Chicago is a city synonymous with fires ever since Mrs. O’Leary’s cow knocked over a lantern in 1871. It only makes sense that the Windy City get its own dedicated program depicting the brave firefighters and paramedics in Chicago Fire.

The series is created by Law and Order great Dick Wolf and is the first series in the celebrated Chicago franchise. The firefighters, rescue squad, and paramedics of Chicago Firehouse 51 forge headfirst into danger every day. Their heroism is the difference between life and day for countless Chicago residents who depend on their unparalleled valor. This high-octane drama offers a view into one of America’s most heroic professions.

Here’s everything you need to know to stream Chicago Fire.

What is Chicago Fire?

How to stream Chicago Fire

There’s a good chance that you’re already looking to AT&T for your wireless needs. The second you sign up, you’ll gain instant access to 45+ channels, including local channels and even free HBO in the Plus and Max channel suites. Plus, it comes with CloudDVR, which lets you record up to 20 hours of TV per month. One account works on two devices. You can add more devices for only $5. You can stream Chicago Fire on all the English-language tiers.

YouTube TV is a great solution for families because one subscription can add up to six accounts. Each account comes with unlimited cloud DVR. You can’t beat the variety, either: There are sports channels like NBCSN, NBA TV, and four ESPN channels, while Disney, Disney XD, Disney Junior, and Cartoon Network will keep any kid (or kid at heart) busy for hours. You can stream NBC and your other local channels. It also comes with a few Spanish-language channels like Telemundo and NBC Universo. AMC, BBC America, and IFC are there too, so you won’t miss out on all that prestige TV. (You can find the full list of YouTube TV channels here.)

How to stream Chicago Fire episodes

If you want to watch episodes of your favorite shows on the day after they air, there’s no better option than Hulu. Chicago Fire season 8 episodes are available to stream on Hulu. The streaming service, which just slashed the cost of its ad-supported version to a mere $5.99 per month (or $59.99 a year), offers episodes of shows including Seinfeld, Family Guy, Golden Girls, and many other hits on-demand. There’s also tons of celebrated original programming including Letterkenny, Veronica Mars, The Handmaid’s Tale, and PEn15, and of course, Chicago Fire. If you subscribe to Hulu Live TV, you’ll get the on-demand portion of Hulu included for free. You can also upgrade to Hulu with No Commercials for $11.99 per month.