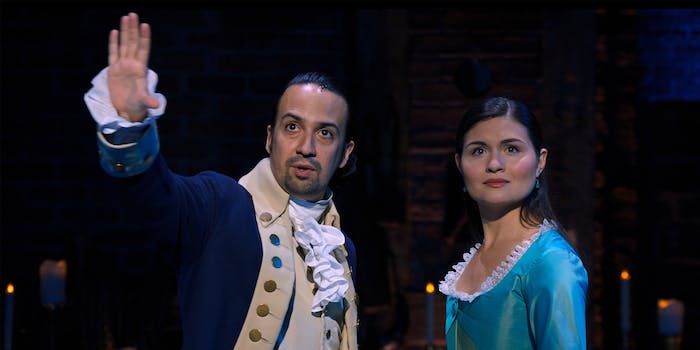 The ‘Hamilton’ cast on Disney+: Where are they now?

The 'Hamilton' cast have landed some impressive roles since leaving the show.

Broadway smash-hit Hamilton is finally available online, streaming on Disney+ from July 3. Filmed in 2016, this live theatrical recording stars the original Hamilton cast on Broadway, led by the show’s creator Lin-Manuel Miranda. The musical’s pop-culture impact can’t be underestimated, so it’s no surprise that the lead actors had very busy careers after Hamilton. There’s a good chance you’ve seen some of their post-Hamilton projects already.

Where are the Hamilton cast now?

If you consume American media, there’s a good chance you’ve seen something involving Miranda over the past few years. Before Hamilton came out in 2015, he was already working on music for Moana and Star Wars: The Force Awakens, where he wrote a song for Maz Kanata’s cantina band. Then in 2017 he starred as Jack the lamplighter in Mary Poppins Returns, and voiced a character on Ducktales. Yes, these are all Disney projects, which explains why Hamilton wound up on Disney+. He’s also written new songs for the upcoming live-action Little Mermaid remake, and had a supporting role as Lee Scoresby in the HBO adaptation of Philip Pullman’s His Dark Materials. Busy guy!

Phillipa Soo is one of the younger members of the Hamilton cast, with Eliza Hamilton as her second Broadway role after starring in Natasha, Pierre & The Great Comet of 1812 from 2012-2014. After Hamilton she starred in the lead role of Amélie, co-starred in The Parisian Woman (also on Broadway), and has appeared in a handful of movies including Netflix’s Chinese-America fantasy musical Over the Moon this year.

Already an established Broadway performer and TV/movie actor before Hamilton, Leslie Odom Jr. continued to book TV and movie roles after he left Hamilton in 2016, including Murder on the Orient Express, the Harriet Tubman biopic Harriet, a lead role in the animated show Central Park, and five upcoming movies including a musical by Sia, a time-travel drama co-starring Orlando Bloom, and a historical drama where he plays musician Sam Cooke.

Also an established actor on stage and screen before Hamilton, Goldsberry now has a lead role in the big-budget Netflix sci-fi series Altered Carbon, starred in The Immortal Life of Henrietta Lacks, and appeared in a slew of TV guest roles.

Previously best known for his work as a rapper in the band Clipping (whose high-concept song “The Deep” was nominated for a Hugo Award and has since been adapted into a novel), Daveed Diggs saw his career explode after Hamilton. Since then he’s had numerous TV and movie roles (Black-ish, Velvet Buzzsaw, Star Wars Resistance) along with writing, producing and co-starring in the indie hit Blindspotting. Currently he stars in the lead role of TNT’s Snowpiercer reboot, and he’s voicing a character in Disney’s upcoming animated movie Soul.

Another longtime Broadway star and TV actor, Jackson has co-starred in the CBS show Bull for the past four years, along with a handful of other TV roles including the animated show Central Park, which stars Daveed Diggs and Leslie Odom Jr.

After Hamilton, Onaodowan starred as Pierre in Natasha, Pierre, and the Great Comet of 1812 on Broadway, and now co-stars in the Grey’s Anatomy spinoff Station 19, along with a whole bunch of TV guest roles including The Get Down.

The youngest member of the Hamilton cast, Ramos made his Broadway debut with this show. Now engaged to former co-star Jasmine Cephas Jones, he went on to star in the Washington, DC production of Lin-Manuel Miranda’s musical In the Heights, and will play the lead in the upcoming film adaptation. Since leaving Hamilton in 2016 he’s also appeared in several films including Monsters and Men, A Star Is Born and Godzilla: King of the Monsters, and had a lead role in Netflix’s She’s Gotta Have It.

Jones has appeared in several unofficial Hamilton reunions since leaving the show: Blindspotting with Daveed Diggs, Honest Thief and Monsters and Men with Anthony Ramos, and the upcoming One Night in Miami with Leslie Odom Jr., where she plays Sam Cooke’s wife Barbara. She currently has a main role in the TV show #Freerayshawn starring Lawrence Fishburne.

Already a Broadway star before Hamilton, Groff has since starred in a new production of Little Shop of Horrors, plays the lead role in Netflix’s Mindhunter, and has a role in The Matrix 4. He also voices Kristoff in Disney’s Frozen franchise.