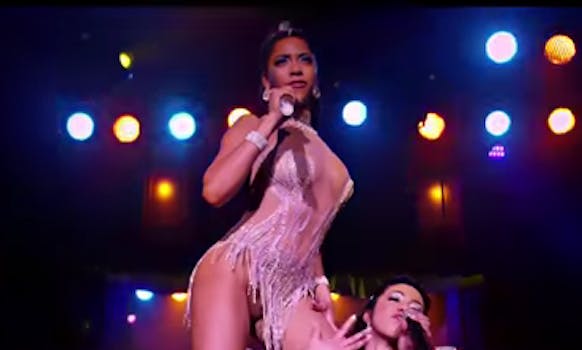 Netflix's rap homage packs personality and understands hip-hop's early mini-eras. But will we get more?

Part 1 of Netflix‘s The Get Down was noisy, flawed, and damn entertaining. It put the stark and very serious realities of the Bronx in the late ’70s against co-creator Baz Luhrmann’s signature narrative bombast. The show’s impressive musical portions and acting revelations (particularly Justice Smith as Zeke, the show’s main protagonist) capably carried the winding multi-story.

Despite the show’s numerous innovations, the product led to so-so reviews from critics, high production costs (roughly $120 million), and rumors of cancellation.

Alas, those worries aside, the divisive show ramps upward in the last five episodes. Part 2, released Friday, gives those already fully invested in the show some reason to look forward. We find the story push one year ahead, with a focus on the music (hip-hop and disco) and the business of music. Here the Get Down Brothers and burgeoning star Mylene Cruz (Herizen Guardiola) both pursue measures of breakout success.

The ultra-magnetic performances race forward, chained together into furious relay, each accomplishing goals or creating momentum for both acts. They quickly serve as tighteners, locking in the show’s central focus.

Mylene is forced to choose between her father’s strict religious orthodoxy and the attraction of secular superstardom. The Get Down Brothers, together and individually, are given missions that are continually tested by the rules of the streets, including the wrath of gangster boss Fat Annie (Lillias White). It’s Annie’s son Cadillac—played with distinction by Yahya Abdul-Mateen II—who steals every scene. The stylish brute is must-see (streaming) television.

"On the one hand, my girl became a disco star and I love her. On the other hand, everybody damn else loves her too." pic.twitter.com/S1l2HIGpm2

Tone also becomes an important feature, as the show thankfully goes darker. Shaolin Fantastic (Shameik Moore) finds himself knee-deep in the drug game quagmire, while trying to commit to hip-hop. One of the more interesting arcs, Mylene’s father Ramon (Giancarlo Esposito) attempts to capitalize on his daughter’s star quality, buoying himself into proto-mega church mania.

The Get Down isn’t without issue, however, mainly in historical over-packing and the use of Dizzie’s (Jaden Smith) comics in the storyline.

"So vicious, so delicious, ain’t no wonder why he’s in all the fly girls’ wishes. Satisfaction guaranteeeeeed!!!" pic.twitter.com/jcj9VfomrL

The comic feature initially comes off as charming, but devolves at times into cheapness, with whole portions of story being advanced within it. There are even scenes where the comic seems to be used as cover for live-action scenes that were apparently never shot.

And we get it: Rap is becoming a thing and this show takes place during its nascent, experimental big bangs. But the context becomes overbearing. In one of the Get Down Brothers’ performances, Grandmaster Caz (a real-life rap pioneer) appears to say his infamous line: “But whatever ya do in your lifetime, ya never let a MC steal your rhyme.” Knowledgeable rap fans know the line was fully appropriated by the Sugar Hill Gang’s Big Bank Hank, who used stolen Caz raps for his performance on the classic “Rapper’s Delight.” However, all of this isn’t acknowledged in the show’s live action, and it’s a superfluous Easter egg.

While these episodes are a step forward, don’t be surprised if the show doesn’t return—especially with Luhrmann moonwalking away from the project. (He directs none of Part 2.) The Get Down has so much unmitigated personality and potential in unpacking (and understanding) the early mini-eras of hip-hop culture, and it would be an absolute shame if it wasn’t renewed for a second season.