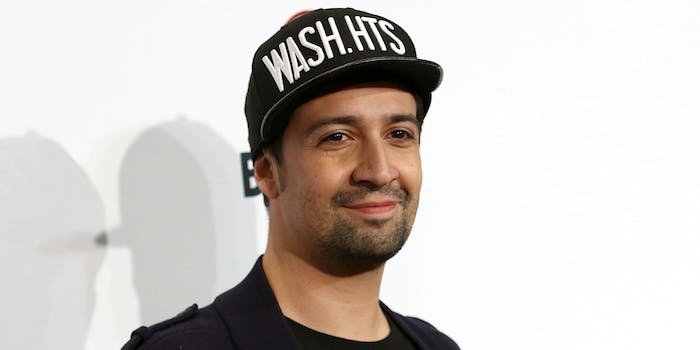 There was a bidding war for 'In the Heights.'

The movie rights to Lin-Manuel Miranda’s first musical has found a new home at Warner Bros. after being released by the Weinstein Company.

According to Deadline, Warner Bros. signed a $50 million deal to obtain the rights to In the Heights—which won four Tony Awards in 2008, including Best Musical—after a bidding war. The musical led to Miranda’s 2009 invitation to the White House, where he introduced the world to what eventually became the opening number of Hamilton.

A theatrical adaptation of In the Heights, which followed a bodega owner and the people who lived in the New York neighborhood of Washington Heights, had been in in the works as early as 2011. After Hamilton became a runaway success on Broadway, the Weinstein Company picked up the project in 2016 with Quiara Alegría Hudes, who wrote the book for In the Heights, set to write the script.

However, after dozens of women came forward, beginning in October 2017, and said that Harvey Weinstein sexually harassed and sexually assaulted them, Miranda and Hudes spoke out against Weinstein. Hudes went a step further and publicly called for the Weinstein Company to let go of the rights to In the Heights, a move that Miranda supported.

“In the Heights is part of my heart and soul. I created it about respect, community, and solidarity,” she wrote. “I hope The Weinstein Company has enough grace, in the wake of the revelations, to respect my stand as a woman, and to allow us to extricate In the Heights from them. In the Heights deserves a fresh start in a studio where I’ll feel safe (as will my actors and collaborators).”

Before the Weinstein Company went into bankruptcy in early 2018, Miranda and Hudes were given back the rights to In the Heights.