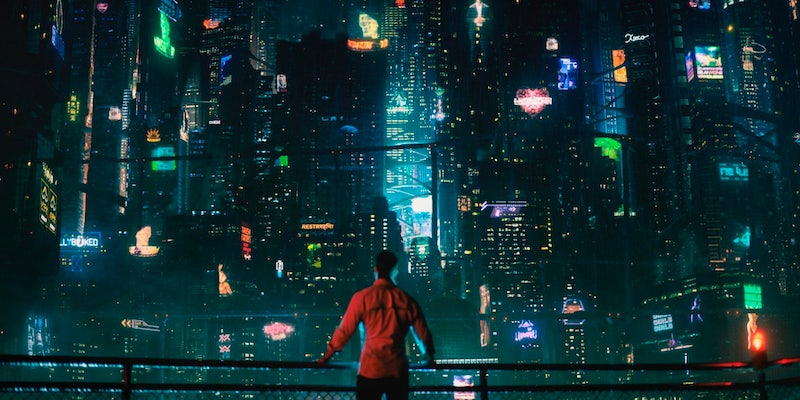 If you’re looking for a Blade Runner clone with excellent fight scenes and rather dubious gender politics, you’ve come to the right place. Adapted by Laeta Kalogridis (Terminator Genisys) from a series of books by Richard K. Morgan, around 75 percent of Altered Carbon is a derivative noir detective story. That’s an unfortunate balance of screentime, because that final quarter is a lot more interesting: a romantic tale of doomed freedom fighters battling impossible odds.

Taking place in the year 2384, Altered Carbon doesn’t think too hard about what the future might look like. It’s gorgeous but unoriginal, borrowing its cyberpunk aesthetic from Blade Runner’s 2019 Los Angeles, right down to the perpetual rain. The only societal change is due to a specific piece of technology, allowing people to transfer their consciousness into a new body.

People’s memories are stored in “stacks” that can be implanted into anybody, which explains why the distinctly caucasian Joel Kinnaman plays a character named Takeshi. (And yes, this does play into a troublesome trend for whitewashing Asian characters.) Born to Japanese and Eastern European parents, Takeshi Kovacs wakes up 250 years after the death of his original body. As the last surviving “envoy” (a highly trained military operative), he has skills that money can’t buy. Billionaire Laurens Bancroft (James Purefoy) revived him to solve a uniquely futuristic murder: his own. Bancroft’s last body died under mysterious circumstances, and he wants to know who did the deed. It’s a great role for Purefoy, combining his talent for sleazy menace with a wardrobe of high-collared Hunger Games formalwear.

This leads into a by-the-book hardboiled detective story, with Kovacs as a stereotypically cynical antihero in a black trenchcoat. He rubs shoulders with the expected cast of tough cops, sex workers, and gangsters, investigating how Bancroft’s death overlapped with other crimes in the seedy underbelly of Bay City. How do we know we’re in a seedy underbelly? Because the show is absolutely obsessed with sexualized violence against women.

Welcome to the sexist future

Following a classic cyberpunk theme, Altered Carbon explores the chasm between rich and poor. The memory-saving technology creates a clever allegory for inherited wealth, with rich people buying immortality and accruing more power as a result. However, the dystopian worldbuilding isn’t very coherent. Racism appears to be over, as reflected by the show’s diverse cast—a priority for showrunner Laeta Kalogridis. At the same time, misogyny is alive and well. There’s a weird clash between the admirable number of lead roles for women of color and the pervasive sexist imagery.

Barely an episode goes by without a naked woman being murdered, injured, or displayed as decoration. By the time they fished someone’s corpse out of the ocean boobs-first, I found myself laughing out loud in disbelief. This may be the most expensive sci-fi series ever made by a woman showrunner, yet it’s poisoned by its toxic treatment of female bodies.

In this world of quasi-immortality, people can be temporarily killed for business or pleasure. This often translates to sex workers being slaughtered and manhandled like objects. We’re meant to feel bad about their exploitation, but the show itself is exploiting them. It uses the dystopian setting as an excuse for sexualized violence, with Strong Female Characters like Kovacs’ ally Detective Ortega (Martha Higareda) as a smokescreen. The volume of dead, naked women is a massive distraction from the show’s stronger points, like the well-choreographed fight scenes and Takeshi Kovacs’ backstory.

Did Altered Carbon focus on the wrong story?

Aside from the sexism, my dislike of the crime storyline is partly a matter of taste. If you enjoy the noir detective formula, you’ll probably get more out of it than I did. The Bancroft investigation has some intriguing twists and turns, and my issues were mostly linked to Kovacs’ pedestrian role. He’s little more than a cyberpunk stock character, barely distinguishable from Thomas Jane’s gritty detective role in The Expanse. The flashback scenes are much more interesting, building on more imaginative, emotionally fulfilling ideas.

In his previous life, Takeshi Kovacs (now played by Will Yun Lee) joined a group of rebels led by the charismatic Quellcrist Falconer (Hamilton‘s Renée Elise Goldsberry). Takeshi and his sister Reileen (Dichen Lachman) formed a close bond during their traumatic childhood, and his relationship with these two women is by far the most compelling emotional thread in the show.

Quellcrist is a visionary and a warrior, training her followers to fight an oppressive regime. There’s a doomed kind of nostalgia to these flashbacks because, without going into spoilers, we know from the start that their mission fails. Kovacs wakes up in the distant future, knowing that he and Quellcrist clearly didn’t make the world a better place.

This gives us an explanation for why Kinnaman-Kovacs is such a grim cliché. He’s traumatized and grieving, and he woke up alone in a dystopian future. Still, that doesn’t actually make him more interesting to watch. Will Yun Lee gives a more engaging and sensitive performance as the younger Kovacs, while Kinnaman follows a predictable trajectory for a badass noir protagonist. We’ve seen his story a hundred times before, whereas the flashback Kovacs feels truly individual. He’s a trained killer whose closest friend is his sister. He’s passionately loyal to his female mentor; an inspirational extremist leader who doubles as his love-interest. You can see the hope and belief shining in his eyes when he looks at her.

It’s hard to map these characteristics onto the present-day Kovacs, partly due to the casting and partly because the two stories operate in different genres. The emotional depth doesn’t follow Kovacs into his next body because when we see Kinnaman holding imaginary conversations with the ghosts of Quellcrist or Reileen, it reads like the overused trope of an action hero motivated by dead women from his past. Rather than making the present-day Kovacs a more sympathetic character, it just made me wish the whole show was about the flashback version instead.

Altered Carbon is one of Netflix’s latest prestige projects, replacing Sense8 in the category of big-budget science fiction. By comparison, it’s just not as good as it ought to be. While Sense8 was far from perfect, it was unique and weird and politically complex. Altered Carbon is nowhere near as ambitious, spending too much time rehashing noir tropes instead of exploring its sci-fi premise. It’s the longform equivalent of a respectable but intellectually lazy blockbuster. Beautiful production values and combat scenes, but nowhere near as smart and exciting as something like Westworld.