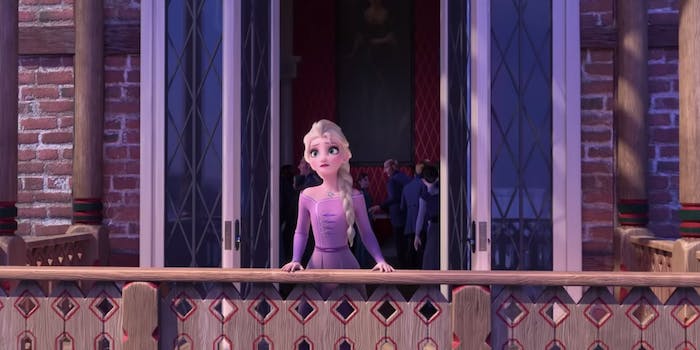 Nothing here matches the glory of 'Let it Go.'

It’s hard to believe it’s taken six years for a Frozen sequel to hit theaters. After the instant success of the first film—over $1.2 billion in worldwide grosses, obscene merch sales, an inescapable soundtrack, and one adorable Oscar win—the existence of Frozen 2 was foregone. The only question is, what took so long?

We’ve had five new Star Wars movies in between the Frozens. So, after all this time, what is there to say about Frozen 2? You can’t call it a cash grab, although its earning potential is certainly a justification for its existence. It’s also not a project driven by creative demands, with its repeated attempts to rekindle the spark that catapulted Frozen so high. Frozen 2 arrives with astronomical economic forecasts and milder critical expectations.

This is a long-winded way of saying that Frozen 2 is a safe movie that plays everything right down the middle. The franchise is too valuable to deliver anything other than a safe, anodyne experience. Frozen 2 digs into the history of both Arendelle and Elsa and Anna’s family. The two are inextricably linked, and as truths about the past come to light, all involved have to recalibrate everything they thought they knew. It starts with a flashback to Elsa and Anna’s parents, Queen Iduna (Evan Rachel Wood) and King Agnarr (Molina), telling the girls Arendelle’s origin story. It involves their ancestors striking a deal with the indigenous people, the Northuldra, with King Runeard (Jeremy Sisto) brokering the deal with the natives.

I know Frozen 2 isn’t the place to expect a deep dive into colonization, cultural appropriation, and other thorny subjects, but this is the most compelling aspect of the story. The script, by Jennifer Lee (who also co-directs with Chris Buck), does a commendable job incorporating it and making it palatable for younger viewers. It also provides a teaching moment for parents, which Radheyan Simonpillai thoroughly explains for Now Toronto.

In the present, Elsa (Idina Menzel) begins hearing voices that belong to the spirits of the nearby enchanted forest, which she has awakened unknowingly. She and her crew—Anna (Kristen Bell), Olaf (Josh Gad), Kristoff (Jonathan Groff), and his reindeer Sven—head into the forest to rectify the betrayals of the past in order to save Arendelle’s present and future. Along the way, the group splits off for side adventures and plenty of songs. The story gets stuck in a rut often, as the adventures aren’t all that compelling, and the musical numbers lack the punch of the first film.

It was always inevitable that the music wouldn’t quite stack up. “Let it Go” is hard to capture twice, and I don’t envy songwriters Kristen Anderson-Lopez and Robert Lopez. But what they come up with here is fine. The songs are fleet and catchy enough, with a few big moments. But nothing matches “Let it Go,” “Love Is an Open Door,” or “For the First Time in Forever” in grandiosity or energy. If there’s a surprise among the songs here, it’s that Jonathan Groff’s “Lost in the Woods” is probably the best of the bunch. On the plus side, for parents especially, Frozen 2 likely won’t become the soundtrack to the next six years of your life like the original did.

As the story moves along, the characters all struggle with the notion of change. There’s a push and pull between maintaining the status quo, reflected in tracks like “Some Things Never Change” and “The Next Right Thing.” Everyone in the film deals with this struggle directly, but it resonates most with Anna and particularly Elsa, as she reckons with her powers and potential. The movie’s message that embracing change is necessary and necessarily good strikes the right chord.

The film’s poignant themes help make up for aspects that don’t work as well. The autumnal setting’s drab, muted colors have a dulling effect. The Frozen films lack the vibrancy of the Mouse House’s Pixar output, and at times, Frozen 2 is an eyesore, notably during a scene where Elsa is alone in a cave. There’s a general lack of visual imagination that keeps me at a distance. With unlimited resources, is this the best the visual team could do? In a year where the big studios gave us new How to Train Your Dragon and Toy Story films, not to mention Laika’s Missing Link, Frozen 2 trails noticeably behind the rest of the pack.

Frozen 2 plays for me the same way as Frozen, which is to say it’s pleasant enough, but ultimately forgettable. My kids’ infatuation with the first Frozen lasted a couple of months, and I expect a similar, or shorter, bout with Frozen 2. As far as family-friendly movies go, Frozen 2 serves its purpose, but you can do better.