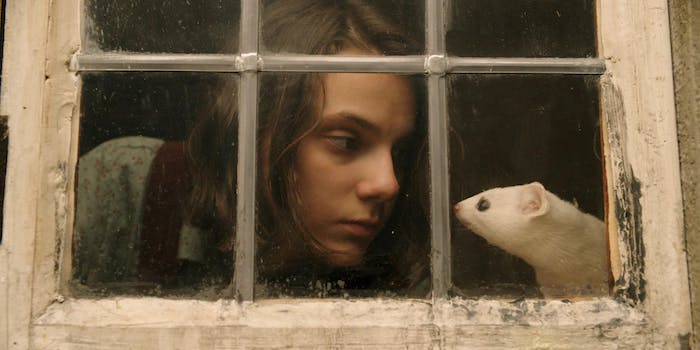 It's much better than the 'Golden Compass' movie, but we still had mixed feelings.

After the notoriously bad Golden Compass movie in 2007, fans of Philip Pullman’s His Dark Materials trilogy have reason to feel apprehensive. While the books are ripe for screen adaptations in the vein of Harry Potter and Narnia, their combination of complex worldbuilding and anti-religious themes were no match for Hollywood. The new BBC/HBO series takes the source material more seriously, but with a thinly-written script from showrunner Jack Thorne, it still doesn’t capture the magic and emotional depth of the books.

Beginning in a quasi-historical alternate version of Oxford University, the first season is largely inspired by book 1, The Golden Compass. 14-year-old Dafne Keen (breakout star of the acclaimed Wolverine movie Logan) plays Lyra Belacqua, an orphan raised by aging academics in Jordan College, after her uncle Asriel (James McAvoy) left her there as a baby.

Everyone in Lyra’s world is born with a daemon, a talking animal companion who shapeshifts until the child reaches puberty, at which point it settles on a form that reflects their personality. This divide between adults and children is a central theme of the trilogy, charting Lyra’s evolution from bratty, adventurous childhood to self-won maturity, echoing the story of Eve eating from the tree of knowledge in the Bible.

Raised in a stuffy world of academics, Lyra craves adventure, but soon gets more than she bargained for when children start to go missing, reputedly kidnapped by a group known as the Gobblers. Hoping to find a missing friend, she moves to London as the assistant of a glamorous intellectual named Mrs. Coulter (Ruth Wilson), a charming figure who hides sinister motives.

Lyra’s world includes other fantasy elements like witches and talking bears, with production design drawing from 19th and 20th-century European influences—which thankfully eschews steampunk cliché. But from a narrative standpoint, the most important thing is the world’s political system. Inspired by the Catholic Church, the Magisterium is an authoritarian regime that blends religion with government, supported by armed police and shadowy informants. Faith and mysticism are explored more deeply in the later books, but for now, we see the everyday impact of life under authoritarian rule. Lyra craves knowledge and experience, while the Magisterium wants everyone to remain ignorant and obedient. They have little interest in finding the missing children, all of whom were conveniently stolen from poor or marginalized communities.

The show makes a surprising number of changes to the story, most of which are helpful additions for new audiences. The smooth and menacing Lord Boreal (Ariyon Bakare) receives a much bigger role than his background part in the book, giving us a central villain at the Magisterium. The Gyptians also get much more screentime; a multi-ethnic culture of riverboat travelers who oppose the religious authorities. One change, however, is a weird misfire. Lin-Manuel Miranda plays the aeronaut Lee Scoresby as a chirpy comedy character, channeling his role in Mary Poppins—this time with a horrible Texan accent instead of mangled Cockney. Scoresby was originally written as a grizzled and laconic Wild West adventurer, but if Thorne felt the need to change him so drastically, why force Miranda to do an accent he clearly can’t achieve? He may be one of the best playwrights of his generation, but he’s no great shakes as a screen actor.

As a longtime fan of His Dark Materials, I found this version disappointingly over-simplified. While the books do follow a traditional Hero’s Journey arc, their true strength lies in the execution rather than the basic events of the plot. Pullman’s evocative prose, emotional depth, and complex characterization is what makes His Dark Materials linger in the heart and mind. Kids of ten or twelve have no problem reading these books and absorbing their deeper themes, with Pullman tying references to William Blake and Paradise Lost into an epic tale of parallel worlds, religious rebellion, and self-discovery. So why does the show feel the need to dumb it down, relying on constant exposition? Why do so many scenes run together like side-quest sequences in a D&D game?

Showrunner Jack Thorne is one of the biggest stars in British theater and screenwriting, with numerous hits under his belt including Harry Potter and the Cursed Child. It’s surprising to realize that his writing is the weakest element of His Dark Materials, but Thorne’s success may actually explain the problem. Along with writing every episode of HDM, he also wrote two other miniseries in 2019, The Accident and The Virtues, plus the movie The Aeronauts, and two children’s films coming up in 2020. Even if we assume that some of these scripts were already in the bank, this is a wildly overcrowded schedule. Which might explain why some of His Dark Materials feels like a first draft.

This should be an adaptation that appeals to adults and kids alike, similar to the Lord of the Rings movies. Instead it feels too much like childrens’ TV to fully engage with older fans, while also needlessly simplifying things for younger viewers. I found the first four episodes to be an entertaining but ultimately unmemorable experience. The CGI/puppeteering work for the daemons was very effective, but when it came to explaining other aspects of Lyra’s world, the script often resorted to info-dump dialogue in a rush to get to the next plot point. Even Lyra’s characterization would’ve benefited from more detail since Dafne Keen doesn’t have the same experience as older actors like McAvoy and Wilson, who turned their roles into total scene-stealers. Powerful and compelling, Mrs. Coulter and Asriel’s grown-up motivations are attractive yet baffling to the 12-year-old Lyra.

Mrs. Coulter is the equivalent of Narnia’s manipulative White Witch, but with more inner turmoil and divided political loyalties. Meanwhile, Asriel is a self-absorbed dick with zero interest in children, which makes for an amusing clash with Lyra’s hero-worship of his exploits as an explorer. McAvoy has enough charisma to make Asriel the most exciting character in a show where he only appears for one episode (so far), which is actually appropriate for his distant yet influential role in Lyra’s life. Details like this make me curious enough to watch more, but I still can’t sign off on His Dark Materials as a truly worthwhile adaptation.

His Dark Materials begins on HBO on Nov. 4.