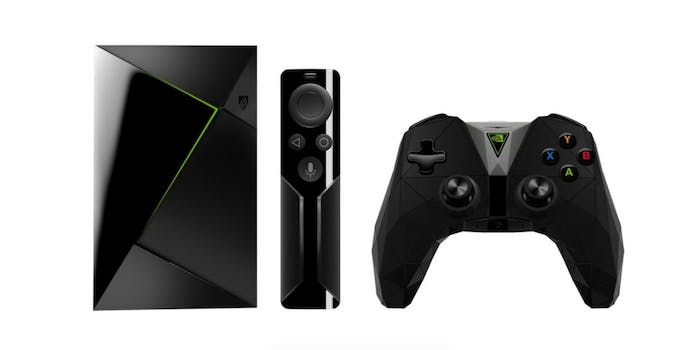 The Nvidia Shield TV lets you control your smart home.

Play a first-person shooter, catch up on the latest episode of your favorite Netflix crime show, open the garage door, and add “bananas” to your grocery shopping list. Those are just some of the things you can do from the comfort of your living room with the Nvidia Shield TV.

While it’s not the newest streaming media box on the market, the Nvidia Shield TV is a capable device with an eye-catching design. It puts super high-quality images onto your TV whether you’re watching Showtime or UFC. Voice commands coupled with an Android operating system let you call up the Google Assistant whenever you want from the remote control. The Nvidia Shield TV even works with the Amazon Echo ecosystem and pairs up with a variety of smart home devices.

Here’s what else you need to know about the Nvidia Shield TV.

What is Nvidia Shield TV?

Nvidia Shield TV is a streaming media box that focuses as much on video games as it does television and movies. In a nutshell, it’s a piece of hardware the puts all the videos you want to watch and games you want to play onto your TV. It has the ability to watch and record live TV, and it integrates well with the Plex Media Server.

The device runs on Android and comes with Google Assistant. That means you can ask your TV what’s coming up on your Google Calendar and have it add items to your shopping list. Nvidia Shield TV can also connect to smart home devices to give you control over your thermostat, lighting, and other parts of your home.

The Nvidia Shield TV box looks like a device targeted at video game enthusiasts. Angular accents and a thin stripe of a green LED light make the body unique. Inside is an Nvidia Tegra X1 processor with a 256-core GPU and 3GB RAM.

The device has five ports: two USB 3.0 slots, one for Gigabit Ethernet, and HDMI 2.0 connection point, and a power port.

Included with purchase is a remote control that has a microphone on it for voice commands. The remote runs on coin cell batteries, like the kind that come in most watches.

You’ll likely also want to get at least one video game controller, which comes included with all but the least expensive package. Each controller has a hands-free mic for using the Google Assistant, headset jack, and a USB charging cable. One full charge should give you 60 hours of play time.

Note that some apps may not be available in Canada.

The game selection on Nvidia Shield TV is solid, with titles such as Metal Gear Solid 2 HD (an exclusive title for the Shield TV), EA Sports UFC, Badland 2, and more. And you get hundreds more by connecting to Nvidia GeForce Now. GeForce Now formerly required a monthly subscription, but it’s now an open and free beta for Shield TV owners. The library of games is enormous and worth exploring.

Because Nvidia is known for making graphics cards, it’s no surprise that the Shield TV offers 4K and high-dynamic range-imaging. In other words, it uses some of the latest technology to give you the highest quality images possible.

The Nvidia Shield TV comes in four different configurations starting at $179.99. That base model, called Shield TV, includes the set-top box and Shield remote. It doesn’t come with a video game controller or SmartThings Link for fully controlling all your smart home devices.

For $199.99, you can get the Gaming Edition, a model that throws in a video game controller. Additional controllers sell for $59.99.

For $219.99, you can get the Smart Home Edition, which adds a SmartThings Link to connect your smart home devices.

The final version lists for $299.99 and adds a 500GB hard drive built for the Plex Media Server.

The Nvidia Shield TV is typically in stock when you buy it directly from Nvidia. You can also buy it from major retailers such as Amazon, Walmart, Best Buy, and so forth.

Should you buy an Nvidia Shield TV?

The Nvidia Shield TV is aimed at people who want a media streaming box that comes with a solid collection of games. To truly appreciate the Shield TV, it probably also helps to care about image quality.

The fact that Nvidia Shield TV runs on Android is a big selling point, too. It gives you customizability that you don’t get from other streaming media boxes. But you have to be willing to dive into it a little. So if you’re not up to doing a bit of tinkering, then the Nvidia Shield TV might be overkill for you.