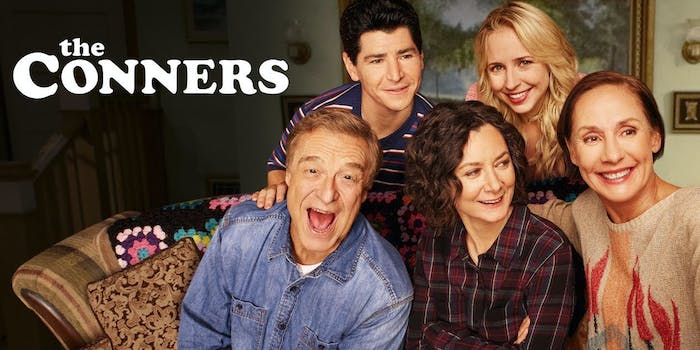 How to stream ‘The Conners’

Welcome back, Conners (minus Rosanne).

Where to stream The Conners

ABC canceled its reboot of Roseanne following a racist tweet from the show’s leading actress Roseanne Barr. But why should John Goodman have to suffer for his fictional wife’s consequences? After a swift outpouring of support from fans eager to see the show continue in some capacity, ABC executives agreed to The Conners: a spinoff in which Barr is creatively and financially removed.

In The Conners, Rosanne has been killed off and the rest of the family is left to pick up the pieces. In the upcoming season, the family will deal with—what else?—the COVID-19 pandemic.

Here’s everything you need to know to stream The Conners.

What is The Conners?

How to stream The Conners

The Conners on Hulu with Live TV

The Conners on Sling TV

The Conners on Vidgo

The Conners on FuboTV

The Conners on AT&T TV Now

How to stream The Conners episodes

If you want to watch episodes of your favorite ABC shows on the day after they air, there’s no better option than Hulu. The streaming service, which just slashed the cost of its ad-supported version to a mere $5.99 per month (or $59.99 a year), offers episodes of shows including Seinfeld, Family Guy, Golden Girls, and many other hits on-demand. There’s also tons of celebrated original programming including Letterkenny, Veronica Mars, The Handmaid’s Tale, and PEn15, and of course, The Conners. If you subscribe to Hulu Live TV, you’ll get the on-demand portion of Hulu included for free. You can also upgrade to Hulu with No Commercials for $11.99 per month.