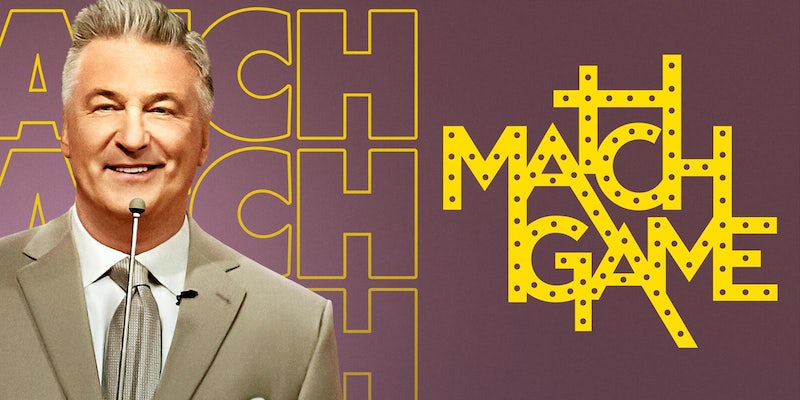 How to stream ‘Match Game’

Game shows are mostly a family affair. Ma, pa, and the kiddos can gather round the telly and enjoy a wholesome half-hour of light competition and sport. Match Game is a whole other beast entirely.

Ever since its ’70s heyday, Match Game was always a way for bawdy comedians and actors to get a few past the censors. I suppose they’re also there to help average contestants come up with clever ways to end a story to win cash. But trust me, it’s the jokes that are the star of this particular game show.

It was revived to the thanks of a grateful world in 2016, with host Gene Rayburn replaced by the equally salacious Alec Baldwin. The rest is the same star-studded hilarity that even grandma remembers. Luckily, the show airs a little after prime time. Get the kids tucked in before watching.

Here’s everything you need to know to stream Match Game.

What is Match Game?

Match Game traces its origins to the ’60s. The original show ran from 1962-1969. It was revived under a few different names from 1973 to 1981. Every single one of these iterations was hosted by Gene Rayburn. The show was revived for a second time in the ’90s, this time hosted by Michael Burger. Its latest iteration was released in June of 2016, hosted by Alec Baldwin.

How to stream Match Game

Hulu Live TV is one of the most popular ways to stream ABC, given the service is owned by Disney. It’s a great option for all live TV, but you also gain access to a massive library of on-demand content including classic and current TV shows, movies, and original programming. As far as live-streaming goes, you’ll have a ton of local, entertainment, and sports channels to flip through, including HGTV, a full suite of ESPN channels, Cartoon Network, FX, and even deep cuts like Nat Geographic and Syfy, and of course, ABC, where you can stream Match Game.

AirTV solves one of the Sling’s biggest problems: The inability to receive all of your local channels. By purchasing a basic AirTV for $79.99 or the AirTV Player for $119.99, you can merge your ABC affiliate and other local channels into your Sling TV, (or on your mobile device if you have the basic AirTV). As the Daily Dot wrote in its AirTV review, “It’s practically magic.”

But AirTV gives Sling users the ability to access all local channels to add to any Sling package. All without a monthly fee.

Vidgo offers a package for under $40 a month that pulls together more than 60 English-language channels into its National English Package, including ABC, Fox, the Disney family of channels, the ESPN family of channels (including ESPN Deportes), FS1, FS2, Fox Deportes and BeIN Sports. It offers an array of entertainment favorites, including A&E, HGTV, History and Lifetime. There’s also a full range of Nickelodeon channels, including TeenNick and NickToons.