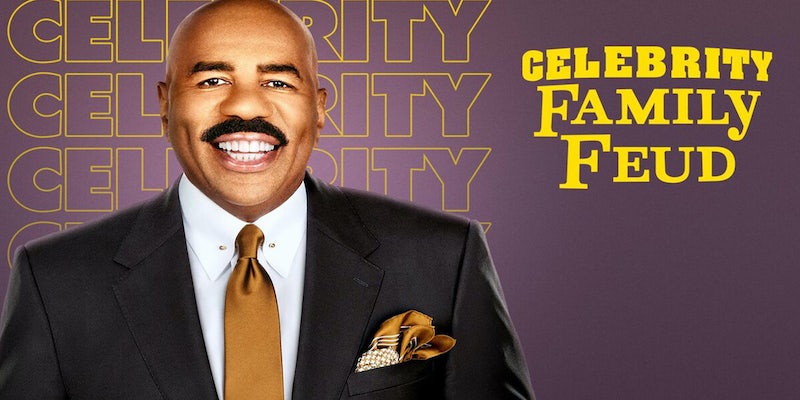 How to stream ‘Celebrity Family Feud’

Since the 1970s, families across the nation have squared off against each other in Family Feud. But what if Hollywood greats got involved? Celebrity Family Feud adds a thick layer of tinsel town sheen to the classic game show.

Hosted by the incomparable Steve Harvey, every episode pits A-listers against each other. Teams are split not by bloodline, but by show. New Queer Eye hosts versus the OG cast. The cast of The Bold Type versus RuPaul’s Drag Race. Admittedly, sometimes the matchups get weird, like Super streamer Ninja versus Pittsburgh Steelers wide receiver Juju Smith-Schuster. No matter who enters the gauntlet the ends remain the same: a game show that’s so fun it belongs in primetime.

Here’s everything you need to know to stream Celebrity Family Feud.

What is Celebrity Family Feud?

The concept of a Family Feud with celebs as contestants first aired in 2008 as part of a special summer television block on NBC, hosted by the Today Show’s Al Roker. The show was revived on NBC in 2015, with Steve Harvey serving as host.

Celebrity Family Feud is available on a few of the major live TV streaming services. When trying to decide which one is best for you, you’ll want to weigh the cost, the other channels you’ll receive, and the compatible devices for streaming.

Hulu Live TV sets you up with local channels and has a broad spectrum of entertainment and sports channels to review, including the full suite of ESPN channels, Cartoon Network, FX, HGTV, and even deep cuts like National Geographic and Syfy. and of course, ABC where you can stream Celebrity Family Feud.

Vidgo offers a package for under $40 a month that pulls together more than 60 English-language channels into its National English Package. Vidgo channels include ABC, Fox, the ESPN family of channels (including ESPN Deportes), and it’s one of the few streaming services that carries BeIN Sports. But it’s like Fubo in that, even though it started out for streaming sports, it carries a lot more now. You might be surprised to know that Vidgo’s an option to stream Celebrity Family Feud—and then you chat about it online via Vidgo’s Social TV platform.

If you’re already looking to AT&T for your wireless needs, you might consider AT&T TV Now to cover streaming for you. AT&T TV Now channels start with Plus and Max, which even include HBO. Then, AT&T plans expand from there, approaching cable selection and pricing with AT&T TV Now’s biggest packages. AT&T streaming also comes with Cloud DVR, letting you record up to 20 hours of TV per month. If you’re looking for Celebrity Family Feud, get in at the AT&T TV Now Plus tier to stream it.

If you’re looking for Celebrity Family Feud, know that you can stream it on YouTube TV.