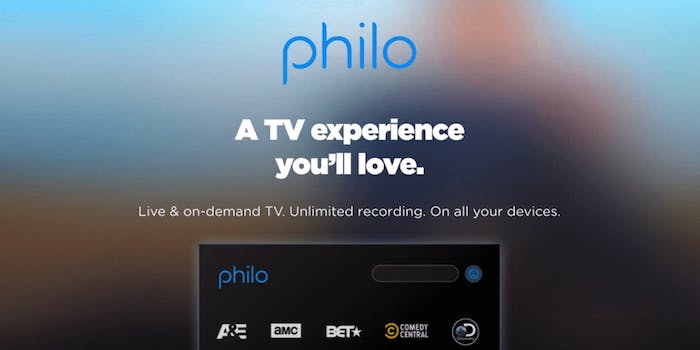 What you need to know about DVR on Philo

Once you’ve decided to make the jump to streaming TV, there are things to consider, like if your new service has DVR. On-Demand doesn’t cover all of your favorite shows, so DVR is an essential tool to make sure you never miss a moment. But not all DVR services the same; they all have their own ticks. Here’s everything you need to know about on Philo DVR: how much it costs, how it works, and where it might fall short.

DVR is a standard feature on most streaming TV services. YouTube TV and FuboTV each offer DVR as a baseline feature. Philo is no exception. Subscribers get DVR included in the cost of their $20-per-month Philo membership. You don’t need to do anything special or activate the feature on a website; it’s waiting when you log in.

Philo’s DVR works just like DVR does in the past: Users select the program they’d like to save, select the record option, and then watch when they have time. Best of all, you don’t need to be watching a channel to record what’s playing on it.

While Philo’s DVR is largely standard, it does have a few cool features.

Users can fast-forward and rewind during their recordings to avoid those nagging commercials. Some services, like Hulu with Live TV, make users pay a premium to skip ads, and some block fast-forwarding through the ads entirely. Skipping ads is one area in which Philo stands out.

Another is its generous DVR space limits. Philio has no hard-stated limits on what or how much users can record. The company offers unlimited DVR. You cannot delete recordings until after 30 days go by .

While Philo lets you skip ads, it’s still subject to the same limitations of all TV providers. Due to the nature of streaming deals, occasionally you’ll get a notice telling you “Recording Disabled” when you go to DVR a show. That’s because Philo doesn’t have the rights to record that program or channel where you live. In my time using Philo, this issue never popped up. But it’s clearly been an issue: The company wouldn’t mention it on its website if it wasn’t.

Also, you can only keep your DVR’d programs for 30 days. After that, they will be deleted to make room for new shows. Considering the lack of hard limitations and Philo’s budget pricing—just $20 per month—that’s quite generous.

Philo doesn’t feature support for local channels in any form, so they are unavailable to save on your DVR. If missing out on local channels has got you bummed out don’t worry. We’ve collected the best ways for Philo subscribers to watch local TV right here. And here’s a complete guide to Philo channels.