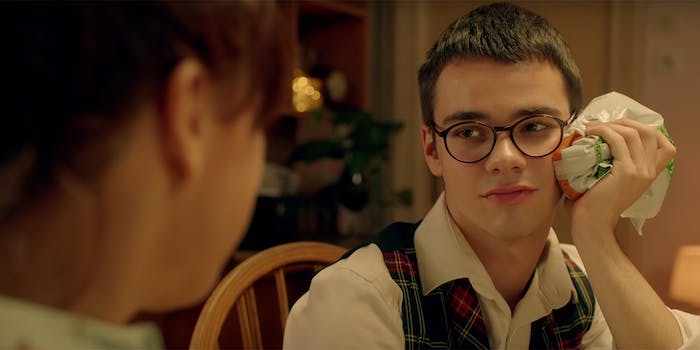 Nerdy teen Andrei recovers from getting turned down by his school’s popular hot girl, Ramona.

Based on the book Suck It, Ramona!, coming-of-age comedy Oh, Ramona! follows nerdy teen Andrei (Bogdan Iancu) as he recovers from getting turned down by his school’s popular hot girl, Ramona (Aggy Adams). When Andrei turns down sexual advances from Ramona in hopes to spark a relationship with her, she decides to date his best friend—leaving him crushed and depressed. In an attempt to cheer him up, his mom takes him to the beach where he meets Anemona (Holly Horne) and the two quickly fall for each other, even though she has a boyfriend. When Ramona suddenly decides that she returns his feelings for her, Andrei finds himself having to choose between the two women.

Oh, Ramona! somehow manages to hyper-sexualize and objectify women, victim-blame a woman who says her boyfriend hit her, embrace homophobic tones, and fat-shame women in just one hour and 45 minutes. On top of its troubling content, the film’s plot makes little sense and its characters’ actions lack any motivation—making Oh, Ramona! one of the worst movies to be added to the streaming service yet.

From the very first second of the film, Oh, Ramona! champions the male gaze and objectifies its female characters. In almost every scene with Ramona and Anemona, the camera pans to their lips, legs, and body. Andrei’s classmates describe hooking up with women in the most primitive way and give advice that runs along the lines of, “pretend to seem interested in whatever she says so she’ll want to have sex with you.” When Ramona calls Andrei for help and implies that the guy she’s dating hit her, Andrei figures that she probably did it to herself to get his attention.

The film’s problematic and regressive, American Pie-era storytelling doesn’t stop with how it portrays Ramona and Anemona. The characters freely wield the term “retarded” to describe their classmates. When Andrei gets accused by his classmates of being gay, he reacts in a visceral, violent way—as if getting accused of being homosexual is the worst possible thing to happen to him in school. Watching Andrei fat-shame a classmate by calling her a “mammoth” and other demeaning terms is ugly, humorless, and needlessly hurtful in any language.

Like Netflix original teen movie Alex Strangelove, Oh, Ramona! relies on heavy-handed, gimmicky visuals—especially in the scenes where Andrei has sex. The film mixes together sex scenes with visuals of other objects—cupcakes that look like breasts, pomegranates split open, a hand dipping into a honey jar, etc.—and the visual effect is downright nauseating. Creators decide to censor other moments, too, that ultimately offer a disjointed statement of values: When the teens smoke pot, the film creators decided to replace blunts with bananas.

By the end of Oh, Ramona!, it’s hard to pinpoint what the filmmakers wanted their audience to learn. The characters seem to make decisions at random and the plot twists to the point that there is no real resolution. There are enough Netflix movies and TV shows that tackle sex and teens in a smart, thoughtful way, like Sex Education, and there’s no need for viewers to waste their time with Oh, Ramona!