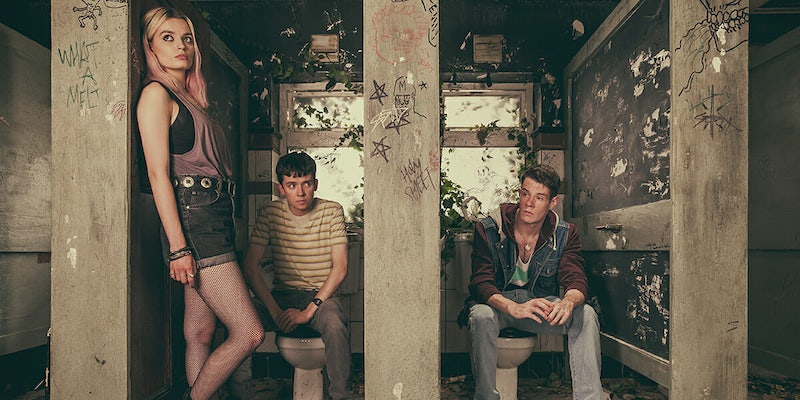 High school is hard enough to navigate for the typical teenager—it’s even more difficult when your mother is a sex therapist who isn’t afraid to discuss impotence with your classmates.

With jocks, popular girls, and geeks galore, Sex Education certainly does seem like an homage to the stereotypical American TV drama. But it’s not. Because of its sincerity, compelling writing, and heart, the series stands out against American teen series it stands alongside on Netflix, like Riverdale or Insatiable. (If you’re an adult watching Sex Education,  you’ll find yourself cringing a lot less, too.) Every moment in Sex Education feels authentic and carefully developed.

Sex Education is both the Skins (that British drama you know you binged in high school) for Gen Z and a public service announcement for inclusive sexual education. The series tackles everything—masturbation, impotence, abortion, pubic lice, sex, and more—in a frank and often graphic way. It’s also plenty inclusive when it comes to LGBTQ representation. And while it might seem radical to compare it to the teen shows of yesterday, from One Tree Hill to Degrassi: The Next Generation, it refreshingly removes the stigma from therapy for teens and their parents alike. It’s also progressive in the way it urges men to see women as people and not merely objects of desire.

In the second episode, Maeve tells her love interest Jackson (Kedar Williams Stirling) that her “thing” is “complex female characters,” and that statement becomes emblematic of the smart, multi-dimensional character development of the entire cast. Maeve is more than just the sassy punk who’s the “best kind of cool because no one knows it yet”; as a sex therapist, Otis avoids his own sexual phobias to focus on the issues of his peers; Otis’ best friend Eric (Ncuti Gatwa) might be gay, but Sex Education gives him other interests and plot points; even all-star swimmer Jackson is a different person when he takes his swimsuit off. Sex Education succeeds at picking apart stereotypes and shows its viewers a bracing sexually and racially diverse picture of high school.

Among all the relationships developed throughout the first season, Otis and Eric’s friendship is a major highlight. When he’s not busy getting caught up in his own problems, Otis is supportive of Eric. Every year for Eric’s birthday, for example, Otis accompanies Eric to a screening of Hedwig and the Angry Inch—and even dresses as Hedwig in full makeup—so that Eric can safely celebrate who he truly is. Maybe it shouldn’t be surprising to see a straight male show up for his gay best friend in such a visible manner, but knowing the prominence of male fragility in culture it’s a meaningful statement.