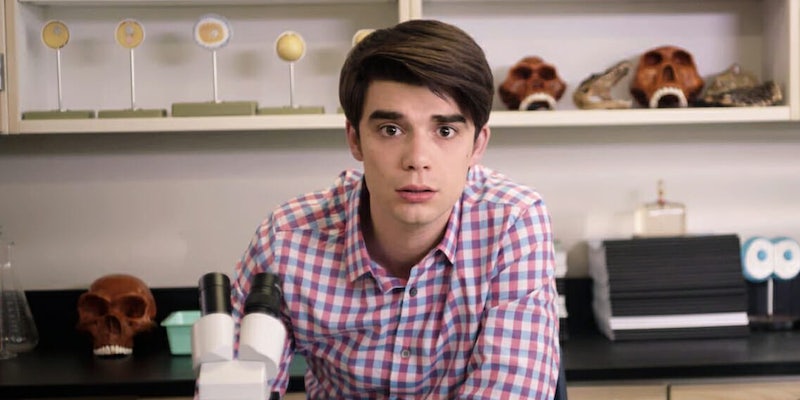 The comedy explores the complexity of teen sexuality in 2018.

Netflix explores the experience of growing up in today’s progressive age and discovering one’s sexuality in new teen romantic comedy, Alex Strangelove. The film shows that despite culture’s recent embrace of LGBTQ rights, it’s still difficult to understand your own sexuality in high school.

Alex Strangelove helped Netflix kick-off Pride Month with an earnest, cringy at times, coming-of-age story about Alex Truelove (Daniel Doheny) who nervously plans to lose his virginity to his girlfriend Claire (Madeline Weinstein) until he meets a handsome gay guy Elliot (Antonio Marziale) at a party. Set in a modern high school where more and more of his peers identify as gay, bi-sexual, and genderqueer, Alex grapples with the reality that he might not be straight.

Alex Strangelove’s plot doesn’t focus on a protagonist struggling in an age where heterosexuality is the norm and LGBTQ folks are heavily ostracized. In fact, many of Alex’s peers defy gender norms and, in-turn, grapple with their own coming-of-age stories. The plot feels sincere and realistic because the director, Craig Johnson, wrote the story based on his own coming-out experience. He told NPR he was inspired by how teens openly discuss their sexuality today.

Acting-wise, Alex Strangelove feels like a Disney film except all the teens do drugs, toss around the word “dick” a whole lot, and actively discuss their sex lives. It’s more realistic in terms of what kids actually deal with in high school in 2018, but it’s also heavy-handed and cheesy. There’s a scene where Alex practices with a stuffed animal what he will say to Claire the night they have sex—like viewers have seen in countless other films—but he tells his stuffed monkey that he wants to “stick his cock inside [her] wet pussy.”

The conversations between the teens about sex and their sexuality are more realistic. The young men approach the gender spectrum with a realistic dose of sarcasm and confusion. When Dell, Alex’s best friend, says that being gay is OK and then quickly replies “fuck no” when asked if he is gay, it accurately displays the chokehold that toxic masculinity has on boys.

Weinstein, as Claire, steals the show as the young woman who faces the heart-wrenching loss of her boyfriend and turns into a support system for Alex while he explores his sexuality. Films often depict the girlfriends (or boyfriends) of the closeted teen as a necessary phase gay people “go through” to realize who they truly are. It was refreshing to see an exploration of the collateral damage that occurs and added nuance to this character. Claire could have been written as a supporting character who gets forgotten about once Alex realizes he’s gay, but Johnson chose to write her as a main character who plays a large role in the plot development.

A lack of diversity in the casting plagues Alex Strangelove. Just like Love, Simon and Call Me By Your Name, viewers get another LGBTQ film about a white male protagonist played by a straight actor. Netflix should consider remedying that the next time it wants to represent the LGBTQ community.

In the end, Alex Strangelove also sends out a separate message to youth—aside from saying it’s alright to be gay, it’s alright to be confused, and it’s alright to experiment—that we all put too much emphasis on sex. Alex describes all his classmates as animals and categorizes them by their “mating patterns,” and says he doesn’t know what his species is because he’s never had sex. When he’s overwhelmed about losing his virginity, he says he doesn’t understand why everyone has to make everything about sex.

Dell makes the profound point that at 17, teens should spend more time enjoying their youth and their time with friends than focusing on a relationship that will fizzle out in college. Some will be disappointed that Alex never has sex with a guy—but sex isn’t the point of Alex’s experience. Instead, he learns how to love and accept himself.

At the end of the film, Alex begins to tell his story on a webcast with Claire by his side. As he talks, screens pop-up and other teens begin telling their own coming-out stories. It’s one of the most powerful scenes of the entire film, reminding viewers that Alex’s story is just one of the millions being told across the world.