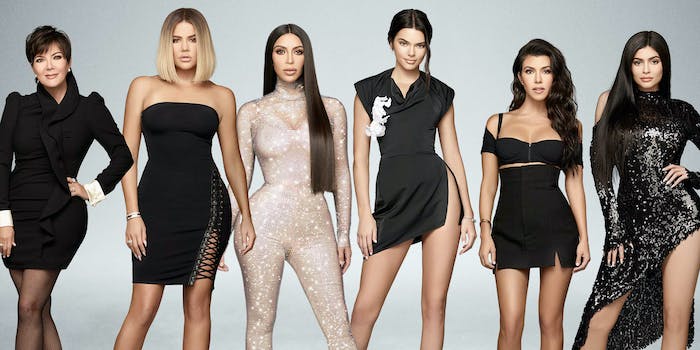 How to watch ‘Keeping Up With the Kardashians’ for free

Can you handle another season of drama?

Critics hate them, fans are obsessed with them. Either way, where would reality TV even be without the Kardashians? The polarizing hit Keeping Up With the Kardashians is back for its 16th season, and there is no shortage of drama.

In case you haven’t… kept up: the Kardashian/West power couple are butting heads over Kanye’s proposal to move to Chicago, while Tristan Thompson and Jordyn Woods deal with their joint betrayal of Khloe. Kylie Jenner may take center stage, considering the fact that she’s a freshly minted billionaire at age 21.

Family feuds are guaranteed, but everyone will likely find common ground among a hatred of the press that simply won’t leave them alone. Still, with a show that’s 16 seasons’ strong, it’s unlikely that the Kardashians will ever shy away from the spotlight.

Here’s everything you need to know to watch Keeping Up with the Kardashians online for free.

Keeping Up with the Kardashians cast

When does Keeping Up With the Kardashians air?

How to watch Keeping Up With the Kardashians online for free

The following live TV streaming services offer E! as part of their channel suites, so you can catch Keeping Up with the Kardashians season 16 online. Even better, you can try any of them with a one-week free trial, allowing you to get started with no upfront cost.

For a more à la carte service, look to Sling TV. It offers two cable packages, Sling Orange and Sling Blue, both of which cost $25 per month. If you grab them both (Sling Orange + Blue) you can save $10 per month. Sling Blue offers more bang for your buck with over 40 channels, including sports necessities like FS1, NBCSN, and NFL Network. That’s also where you’ll find E! YHere’s the complete guide to Sling TV channels.

Hulu with Live TV is one of the most popular ways to stream live TV. In addition to Keeping Up With the Kardashians, you gain access to a massive library of on-demand content including classic and current TV shows, movies, not to mention Hulu’s original programming. As far as live-streaming goes, you’ll have almost 60 channels to flip through, including HGTV, a full suite of ESPN channels, Cartoon Network, FX, and even deep cuts like Nat Geo Wild and Syfy. Here’s the complete list of Hulu Live TV channels.

YouTube TV is a great solution for families because one subscription can add up to six accounts. That’s enough for each Kardashian/Jenner sister and one amazing momager.  Each account comes with unlimited cloud DVR. There are sports channels like NBCSN, NBA TV, and four ESPN channels. Disney, Disney XD, Disney Junior, and Cartoon Network will keep any kid (or kid at heart) busy for hours. It also comes with a few Spanish-language channels like Telemundo and NBC Universo. AMC, BBC America, and IFC are there too, so you won’t miss out on all that prestige TV. (You can find the full list of YouTube TV channels here.)

How to watch old Keeping Up with the Kardashians episodes

If you want to watch episodes of Keeping Up with the Kardashians the day after they air, there’s no better option than Hulu. The streaming service, which just slashed the cost of its ad-supported version to a mere $5.99 per month, offers all episodes of Keeping Up with the Kardashians on-demand. If you subscribe to Hulu with Live TV (featured above), you’ll get the on-demand portion of Hulu included for free. You can also upgrade to Hulu No Commercials for $11.99 per month.

Seasons 1-15 are available for purchase on Amazon Video starting at only $1.99 an episode. It’s a great place to catch up on older seasons or buy episodes à la carte. Entire seasons start at only $9.99.