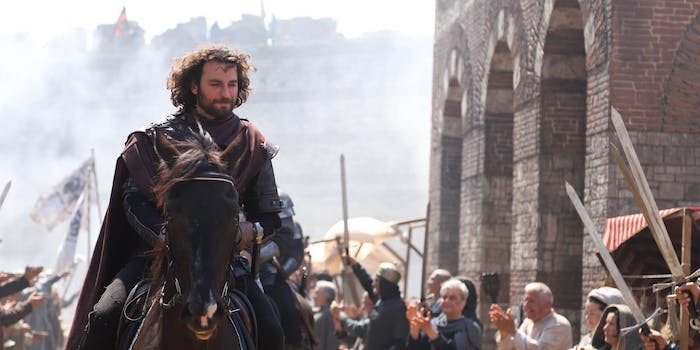 Netflix’s efforts to conquer the geography of television and streaming remain unlimited by genre or form, and with Rise of Empires: Ottoman, the service aims its artillery straight at the History Channel’s domain. This isn’t Netflix’s first entrance to this arena, but it’s certainly its best. Roman Empire, which boasted Game of Thrones alumnus and portrayer of frequently-murdered medieval-ish characters Sean Bean as its narrator, made good use of its production value but was fairly uneven. (Plus, haven’t we focused on the Romans enough?) And the less that can be said about Empire Games, Netflix’s cursory and dubiously researched survey of six civilizations (or groupings of them) and their rises, the better.

Rise of Empires: Ottoman builds on Roman Empire’s foundations even as it focuses on the fall of the Holy Roman Empire, the successors to the eastern reaches of the empire of Rome and history’s primary custodians of one of human civilization’s crown jewels, the city of Constantinople. That city’s conquest, by Mehmed II and his Ottoman forces in 1453, who would rename it Istanbul and make of it the capital of their own empire, is the focus in this well-paced, lusciously-filmed docudrama, which mostly succeeds even if it fumbles its ending.

The series, directed by Emre Şahin and written by Kelly McPherson, is co-produced by Turkish company Karga Seven Pictures and American company STX Television. While its cast is predominantly Turkish—a good thing, for a show about the Ottomans—it was filmed in English, and it’s clear that American audiences that devoured Game of Thrones were a big part of the intended audience. The show doubled down on Netflix’s casting of Bean in Roman Empire by casting another Thrones alum, Charles Dance, as its narrator. Dance’s voice, all proper British diction and commanding basso rumble, is a terrific one for this sort of narrative, and he ties the show’s two aspects, drama and documentary, together fairly well.

Unlike with prior Netflix Originals docudrama efforts, all the footage was custom-made for the show, including those with the talking heads. That helps with the coherence of the narrative here, and for the most part, the historians brought in to weigh in on the conquest of Constantinople are refreshingly lucid, compelling, and to the point, eschewing the genre’s customary stodgy academic bent. The show certainly gears itself toward cutting the fat, and while I’m no expert on the Ottomans or the Romans (whom we would call Byzantines, but that isn’t what they called themselves), my recovering medieval history major self is savvy enough to note that many of the finer historical details here were cut in order to keep the narrative flowing and prevent the series from being too dry.

And dry it is not, with blood cinematically soaking the stones of the city and its outlying fields and pouring into its seas in pretty much every episode. This is where the show wears its Game of Thrones influences on its sleeves, making it abundantly clear, as if it wasn’t already, that any series with a medieval or Renaissance setting that has feuding powers and a battle at its center is in some sense under that show’s shadow.

The series spends more time with the Ottomans, the conquerors, than with the Romans, the conquered. This is an understandable decision for a Turkish show, and a refreshing one, since for once, American viewers are encouraged to root for the Muslim, not Christian, power. But the time it does spend with the Romans is well-spent: the Genoese soldier of fortune Giovanni Giustiniani (Birkan Sokullu) is convincing as a rakish but determined defensive military expert, and tensions between him and the self-preservational merchant and grand duke Loukas Notaras (Osman Sonant) are well-rendered. They take the starring roles on the Roman side, with emperor Constantine XI Palaiologos (Tommaso Basili) portrayed as caught in the middle of their bickering, a proud and determined leader willing to fight for his people and city but ultimately unable, without the resources or timely support from European powers, to do much to save them.

On the Ottoman side, Mehmet (Cem Yiğit Üzümoğlu) is a precocious, brash, and charismatic lead, if somewhat one-note, and the show does a solid job portraying his ups and downs as a commander and in his court, where tensions with his father’s grand vizier, Çandarlı Halil Pasha (Selim Bayraktar), are ever-present. And the tensions between the Ottomans and their enemies to the west, the Hungarians and Serbs, are explored through Mehmet’s relationship with his mother-in-law, Mara Branković (Tuba Büyüküstün), who is portrayed effectively but a bit underutilized. Most of the other leading characters on both sides are charged primarily with providing connections between these six major players, and do so solidly.

It’s an accomplishment to adapt a historical event whose outcome is known to all the world into a series that manages to keep its narrative tension, and for that, the show deserves praise. Occasionally, sections detailing some of the specifics of the battle and its technology drag a bit, and the finale, for all the bloody battle scenes it packs in, falls a bit flat—a series showing an ending we know is coming needs to pull out all the punches in order to land, and this one falters a bit. But ultimately, the show succeeds in creating crossover appeal outside of the usual Bored Dads Who Love Military History who gravitate to this type of series. Rise of Empires: Ottomans breathes some narrative life into the story of the beginning of an empire all of us who live in a world in which Istanbul, not Constantinople, is Turkey’s major city should know more about.