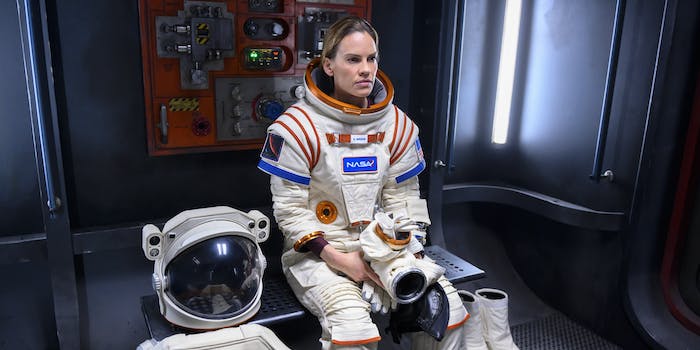 Hilary Swank stars in this disappointing drama about an astronaut leading a groundbreaking mission to Mars.

Netflix‘s Away is possibly best watched in some kind of drinking game format. “Take a drink every time an astronaut behaves in the least plausible way you can imagine,” perhaps. Presented as a real-life angle on spacefaring sci-fi dramas, it’s actually driven by the kind of contrived soap opera conflicts you see in something like Downton Abbey—although sadly not as fun. The main characters are constantly stressed out, but the plot and pacing don’t offer us a fully-fledged thriller. Picture a middle-of-the-road office drama like The Morning Show on Apple TV+, except each episode involves a subplot where the main characters might get blown up or asphyxiated by the vacuum of space.

RELEASE DATE: Sept. 4, 2020
CREATOR: Andrew Hinderaker
STREAMING: Netflix
Hilary Swank stars in this glossy miniseries about an astronaut leading a groundbreaking mission to Mars. More family drama than sci-fi, it struggles to find a balance between sentimentality and thrills.

Created by Andrew Hinderaker and inspired by a 2014 Esquire article, Away imagines the first crewed mission to Mars. NASA astronaut Emma Green (Hilary Swank) leads an international team who will spend three years together in close quarters: British botanist Kwesi (Ato Essandoh), Russian cosmonaut Misha (Mark Ivanir), Chinese astronaut Lu (Vivian Wu), and Indian doctor Ram (Ray Panthaki). Back on earth, Josh Charles plays Emma’s husband Matt, who will raise their teenage daughter Alexis (Talitha Bateman) alone while mom is in space. The show is very explicitly about work/life balance; something that male-led narratives are less likely to explore. I found myself torn between annoyance at the way it laid out Emma’s story (ie. by prioritizing emotional turmoil over astronaut stuff), and developing the opinion that Emma is a pretty bad wife, mother, and team leader. Probably not the desired outcome of a “can women have it all?” drama with distinctly schmaltzy undertones.

Along with abandoning her daughter for a potentially lethal voyage to Mars, Emma chooses to leave immediately after her husband has a stroke—a massive, unpredictable complication that means he’ll have to acclimatize to using a wheelchair while being a single parent and holding down a high-stress job at NASA HQ. He encourages Emma to continue with the mission, and the first episode kicks off with some inspirational astronaut speeches, making the argument for why space exploration is so important. But after that, the show does a poor job of illustrating why Emma really needs or even wants to go to Mars. Hillary Swank’s face is usually fixed in a rictus of tension, and the story skews heavily toward conflicts among the crew and long-distance stress about her family’s wellbeing. The crew situation is particularly frustrating, straining credulity to breaking point.

Back in 2005, a British TV channel aired a reality show called Space Cadets, where a group of contestants were given extensive astronaut training, preparing them for a mission into low earth orbit. In fact it was an elaborate hoax. The contestants were selected for their gullibility and comical lack of suitability for the task, pranked by actors playing members of the training crew. I thought of this while watching Away, a show about five people who should never be allowed onto a spaceship in the first place.

For a mission like this, the crew would be announced years in advance. They’d train extensively together, and be selected for their ability to work as a team and stay calm under pressure. In real life, space agencies spend copious time and money doing social experiments to see how small groups of people might interact during a long-haul space voyage. Ridley Scott’s The Martian is one of the best fictional examples: An astronaut thriller where the dangers are external, and the heroes rely on their own expertise while displaying a tight-knit rapport and sense of humor during life-threatening situations. Away is basically the opposite of this.

The five astronauts feel like near-strangers at the start of the series, and some of them actively dislike each other. Two are awkward ethnic stereotypes. Misha the Russian is gruff, hot-tempered, overbearing and sexist, with vocal qualms about working under Emma’s leadership. He and the Chinese astronaut Lu both think Emma is unqualified and overly emotional, an opinion that’s unfortunately held up by Emma’s actual behavior throughout the show. Meanwhile, Lu is introduced as a high-achieving ice queen whose life is controlled by the manipulations of an oppressive Chinese government, and fealty to a loveless marriage with a husband who scolds their young son for getting a 98 on a test. (America, meanwhile, is only ever depicted through the bland lens of Matt and Emma’s wealthy suburban lifestyle.) Even when the plot hinges on technical problems instead of interpersonal conflicts, those issues often seem ridiculously contrived. For instance, there’s a spacewalk scene where Emma is thrust into mortal peril because they don’t have a long enough piece of space rope for her to reach a certain part of the ship. Why wouldn’t they just have a longer rope? They know how big the ship is!

The overall vibe is like watching 10 episodes of that one trope where an overworked mom has an argument at the office, and then goes to cry in her car. Except in space. It’s aiming more for an IRL drama audience than sci-fi fans, and thanks to the presence of Josh Charles, I did think a few times of The Good Wife—a comparable but far more entertaining show about a high-achieving mom. Charles is still immensely likeable in Away, and has the most well-developed role in a show full of rather simple characters. But that in itself is a problem, because Emma is ostensibly the protagonist, and she only seems to have two settings: stress and sentimentality. She also isn’t very good at her job, failing to take care of herself and the crew’s mental wellbeing during difficult circumstances, while Matt relays impressive technical solutions from NASA HQ. It’s hard to understand why she was picked as the team leader in the first place.

You’d think that Away‘s writers would’ve spent more time troubleshooting whether the heroine fell into any commonplace sexist tropes. Like, for example, being repeatedly rescued by her husband’s superior expertise. However this (and Away‘s woolly attitude to scientific detail) wouldn’t be a such a problem if the show either leaned further into being a death-defying thriller, or fully embraced its soapier side.

Away premieres on Netflix on Sept. 4.