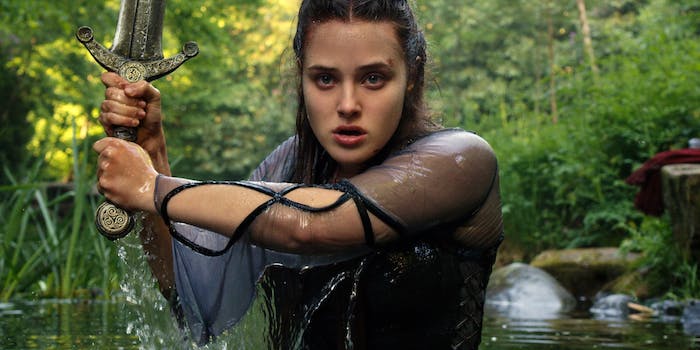 Katherine Langford is the Lady of the Lake in this glossy-but-unoriginal new Arthurian fantasy drama.

Loosely based on Arthurian legend, Cursed is the latest Netflix fantasy show to offer excellent production values, a likeable cast, and somewhat mediocre writing. Like The Witcher, The Dragon Prince and Amazon’s Carnival Row, it follows a familiar D&D format of quasi-historical European fantasy tropes played out by a diverse cast.

Katherine Langford (13 Reasons Why) stars as Nimue (aka the Lady of the Lake), in a kind of origin story for Excalibur, which plays a similar role to the One Ring in The Lord of the Rings. Devon Terrell (star of the Barack Obama biopic Barry) plays Arthur, an approachably hunky riff on the future king. Another thing Cursed has in common with The Witcher and Carnival Row (and indeed the BBC’s Arthurian comedy-drama Merlin) is its political allegory, with magical people oppressed by human authorities. “The fae” are hunted down by an army of fascist Christian monks led by Peter Mullan, one of the most reliably terrifying actors in the business. These fae tribes include reptilians and elves with cool horns and antlers, but Nimue’s people, the “sky folk,” are superficially indistinguishable from humans, making it easier for her to hide in plain sight.

Fleeing human invaders, Nimue embarks on a quest to deliver the Sword of Power (not yet named Excalibur) to the wizard Merlin (Gustaf Skarsgård) who has fallen on hard times while working for the childish and cruel King Uther (Sebastian Armesto). Along the way, Nimue struggles with her burgeoning magic powers, finding new allies like Arthur and a nun called Igraine (Shalom Brune-Franklin), whose arc I ultimately found more interesting than Nimue’s. Emily Coates is notably alarming as an obsessive young Christian zealot, one of the main antagonists alongside Peter Mullan and Teen Wolf‘s Daniel Sharman, who plays a looming goth assassin called the Weeping Monk. Barely speaking in the first half of the season, he’s a slow burn who pays off later on.

Cursed was created by Tom Wheeler (Puss in Boots) and comic book writer/artist Frank Miller (Sin City), although I have my doubts about how much Miller was actually involved. The show was developed from a YA novel written by Wheeler and illustrated by Miller, and there’s little overlap with Miller’s typical calling-cards: edgy hyperviolence, stylized visuals, and sexism.

By contrast, Cursed includes a wide variety of non-sexualized female characters, and embraces a sincere tone that falls somewhere between Game of Thrones and a Renaissance Faire LARP. With director Zetna Fuentes setting the tone for the first couple of episodes, the show is full of sweeping landscapes, beautifully-designed fantasy grottos, royal power struggles, and the occasional interlude for “hey-diddle-diddle” bardic folk music. Written by composer Jeff Russo (Legion; Star Trek: Picard), the orchestral score injects a sense of epic romance into some rather boilerplate Hero’s Journey screenwriting.

Frustratingly, the show improves very gradually from outright dull in the first few episodes, to genuinely compelling by the finale—a journey I wouldn’t have finished as a casual viewer. One of the main problems is a lack of humor and personality among characters we’re meant to find engaging. The sword quest drama is all very serious and angsty from the get-go, but it’s not actually interesting until the final third. It would be a lot easier to get invested if Cursed had more of a sense of fun, which was never a problem for the lower-budget Merlin—or indeed for the good seasons of Game of Thrones.

I also suspect that certain elements were inspired by Netflix’s internal idea of What Audiences Want. The platform’s use of algorithmically-generated story ideas is well known. A few years ago, we saw multiple shows where young psychic/superpowered women were kidnapped by evil, patriarchal scientists; now we’re getting more Chosen One fantasy adventures (Warrior Nun, The Old Guard, Dragon Prince, Sabrina, The Dark Crystal, She-Ra), some of which are great while others seem purposefully derivative. Many of the locations in Cursed could easily be reused from The Witcher, right down to the peasants muttering ominous threats in dingy alehouses.

The plot upcycles some vague concepts from Arthurian legend, but overall this is a familiar kind of YA story about a young woman who becomes the figurehead to a rebellion, beset by love triangles and dangerous superpowers. Nimue’s appeal mostly relies on Katherine Langford’s emotive abilities, rather than any specific personality traits.

This is particularly disappointing within the context of other Arthurian adaptations, which are often very shallow and erase the Welsh background of these myths, branding Arthur as a wholly English hero. (Most American viewers will be unaware that anti-Welsh bigotry is a thing in the UK, following centuries of attempts to violently suppress Welsh language and culture.) It would be nice to see a show like this—an expensive drama with a diverse cast and a high-profile launch—from a Welsh showrunner, displaying deeper knowledge of the source material. In Cursed, Arthur and Nimue are basically stock characters, starring in a coming-of-age drama that takes more than half a season to really get going.